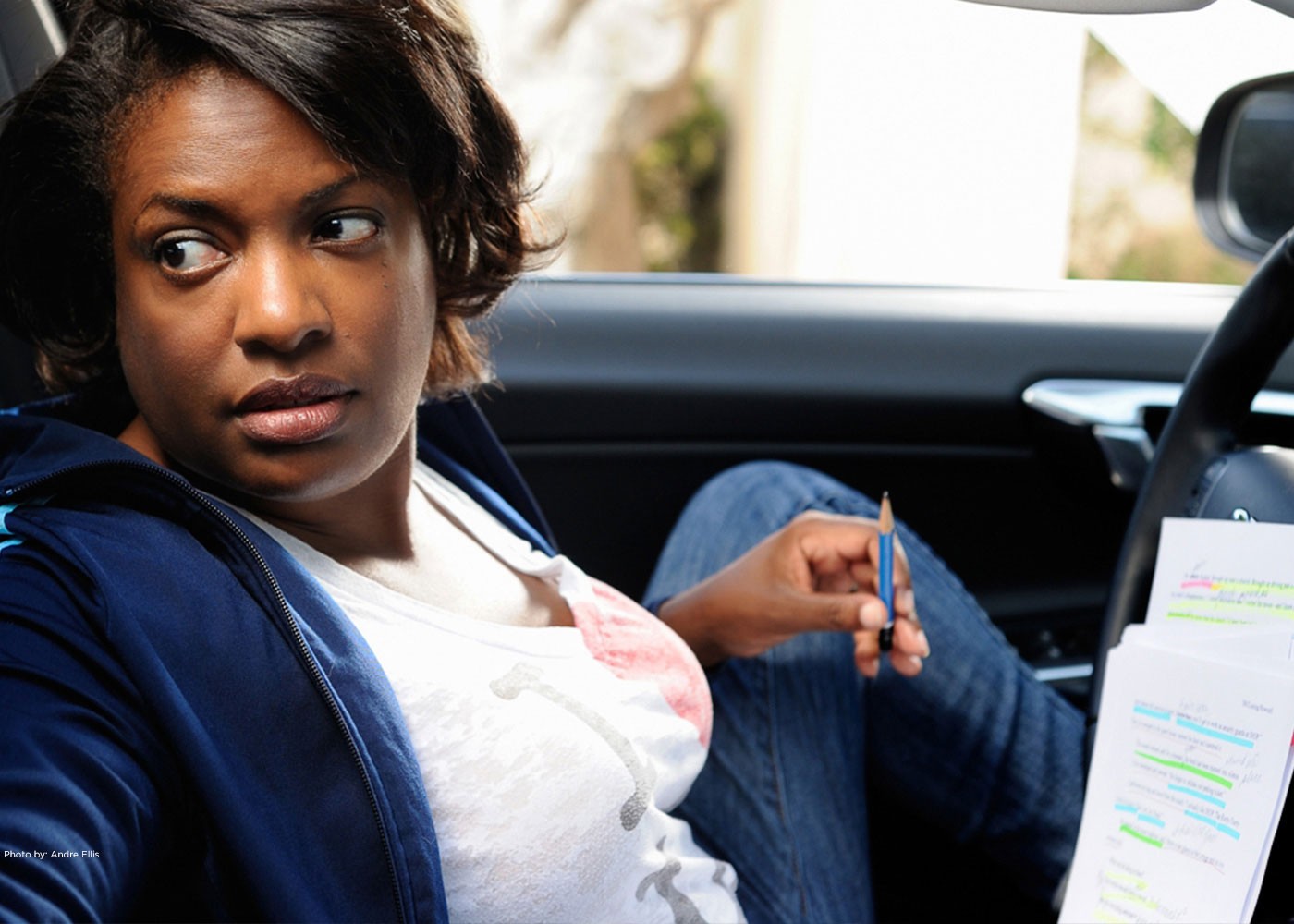 Crime writer Rachel Hall works on her novel in her car before her workday as a Cedars-Sinai development officer begins. Photo courtesy of Rachel Hall.
Employees

Enter the parking structure beneath 8484 Wilshire Boulevard at dawn. As you pass through the forest of concrete pillars on the lower level, you might see the dull cab light of a solitary Mercedes-Benz. The engine will be off. The body inside will appear motionless.

You’ve stumbled upon the office of crime writer Rachel Howzell Hall, and chances are she’s penning her latest thriller against the steering wheel.

Up in her office at 6500 Wilshire Boulevard, Hall is a senior development officer for the Donor Relations Department. She writes to donors on the clock and continues her novel writing during her lunch breaks. She pulls her desk chair to the window, manuscript and pen in hand.

"I’ve been doing this kind of regimented, segmented life all my career," she said. "That’s all I get, you know, because I work and I’m also a mom."

The author of nine books—including a New York Times bestselling collaboration with crime-writing heavyweight James Patterson—Hall has perfected the art of finding time, successfully managing her day job and a novel writing career since her first book was published in 2001.

Her latest, 400-page manuscript is the product of nine months of parking spaces and lunch breaks. Hall only shares her work with her husband, David, before sending it to her agent. So for now, what’s between the pages remains a mystery—in more ways than one.

How does a full-time parent, partner and employee find the determination to spend every spare moment crafting 90,000 words of a fictional world, one hour at a time?

My daughter is looking at me. She’s seeing that yes, you can be a nine-to-fiver, you can be someone’s wife and someone’s mom, but you can also be that person you were meant to be. I was always meant to be a writer.

"There was an alley behind our apartment. That’s where people were jumped, raped and beaten down," she recalled. "LAPD helicopters would come, and my bedroom would light up."Hall remembered the walls around her illuminating when she was nine years old.

t was 1979. Hall would sit on her bed and write in her journal as the helicopters combed the streets outside her window.

The second oldest of four children, Hall and her family lived in an area of South Los Angeles nicknamed "The Jungle." At that time, it was a neighborhood known for gang violence and crime. On more than one occasion, Hall heard gunshots coming from the apartment beneath her own.

A more-than-familiar face to local librarians, Hall soon found herself running out of books. She turned to her older brother, Terence, who was in high school. She borrowed titles from his curriculum—half of which she admitted she didn’t understand at the time, but she said her ability and thirst for reading increased.

But teacher censorship and limited library stock did not hold Hall back from exploring the world through art—in large part, she said, due to the determination of her mother.

"My mom was the type to scour the newspapers for opportunities. She found free classes at the University of Southern California (USC) for music and art. So, I took piano and art at USC."

Hall said her mother’s gestures aimed to do more than support creative expression. They got Hall away from the apartment, and away from danger, for as many hours as possible.

Fueled by creativity, it was not long before Hall told her parents it was time for her to leave. She was going to study English and American literature at the University of California, Santa Cruz.

Her parents were supportive—and not the least bit surprised. 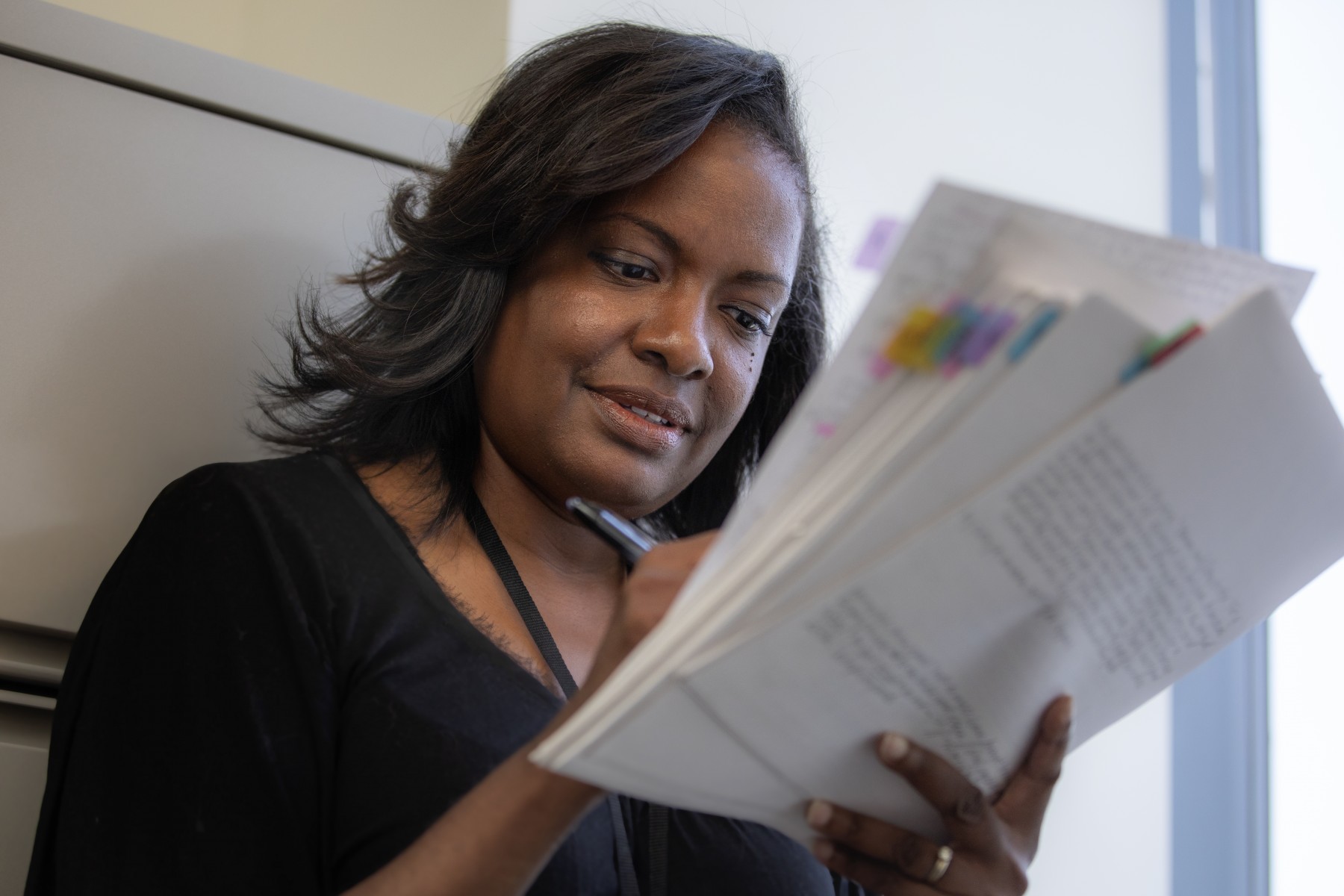 Hall works on her novel during her lunch break. Photo by Cedars-Sinai.

But through the excitement, Hall did not know the clouds were gathering.Hall encountered success quickly. Only a few years after graduating college, she found an agent and her first book, A Quiet Storm, was published. The story follows two sisters and the secrets that threaten to tear their worlds apart. It was reviewed in O, The Oprah Magazine and quickly identified Hall as a talented new voice.

"I tried to get another contract. But this was a time in publishing where... Hall paused. "My voice wasn’t black enough. I have an editor’s letter saying, 'Your voice isn’t black enough.' I’m like, "I’ve been black all my life. How is that possible?'"

Hall struggled to find traction after A Quiet Storm. She was repeatedly told her experience wasn’t sufficiently authentic. Her agent gave up, but Hall didn’t lose her determination.

"I wanted to write a procedural," she said, referring to the crime subgenre made famous by authors such as Raymond Chandler and TV shows such as CSI. "But at the time, I was terrified. I wasn’t a cop. I was scared to write it."

She admitted, looking back, she didn’t know what scared was. That day would come in 2003 when she and her husband were expecting a child.

"My doctor felt a lump in my right breast," Hall said. "And she’s like, 'Okay, you’re pregnant. It may not be anything, but just to be sure, I’m going to send you to a radiologist.'"

Hall underwent a biopsy. She had phyllodes tumor sarcoma, a type of cancer that was being fed by the estrogen created during her pregnancy. And it was growing.

As a healthy 33-year-old woman, Hall was stunned. And only three months before she was due to give birth, she underwent surgery.

Fortunately, the procedure was a success, and a few months later, Hall’s daughter, Maya, was born. Hall said she owes Maya her life, and she and her husband bestowed on Maya a fitting middle name: Grace.

"Because of her, something that was in me grew enough to be caught," Hall said.

Understandably distracted from her writing, Hall had weathered a storm, but the clouds had not yet cleared. Three years after Maya’s birth, doctors found another lump, this time in Hall’s left breast. She underwent yet another surgery and was placed in a high-risk cancer program.

"This was the point in my life where I’m thinking about mortality. Because my body obviously likes making cancer," Hall said. "What do I want to do before I go?"

Hall decided to get back to writing. She was going to write the crime thriller she always wanted to read.

"I wasn’t scared, because I had done the scared thing. True fear was thinking you and your baby were going to die. Writing a crime book? Whatever, I can do that," she said.

Hall’s first crime novel, Land of Shadows, hit shelves in 2014. It follows the story of Lou Norton, a brilliant and dry-witted detective who knows the hills as well as Hall knew "The Jungle." Against the backdrop of a divided and gentrifying community, Norton hunts down a young woman’s killer and confronts her own haunting past.

"I wanted to explore the part of town where I grew up," Hall said. "I wanted to show readers that L.A. is more than Beverly Hills and Santa Monica—that there are interesting stories here."

Hall was at one of her high-risk cancer program appointments when her agent called. They had sold two more Lou Norton novels. Hall hadn’t even started writing them.

She had a series.

Hall’s voice was being heard. She went on a book tour of the United Kingdom. She was interviewed on NPR. In 2016, she was approached to write a new story, The Good Sister, for the James Patterson crime anthology The Family Lawyer.

All the while, Hall adhered to her strict process of writing in cars and lunch breaks. She maintained her family life, making time for soccer practice and family outings, and she worked hard at her day jobs, writing for City of Hope and the Pancreatic Cancer Action Network before accepting her current role at Cedars-Sinai.

The skies had cleared.

Hall’s connection with her role in the Donor Relations Department is a profound one. It is not only informed by her passion for writing but also her—and Maya’s—cancer survival experience.

"It’s a nice thing to get up and say, 'I’m going to work for a place that’s saving lives,'" she said. "When I write to donors, I want them to know for certain that we honor and respect everything they do for us. Because I believe it."

Hall continues to enjoy success in both her careers. A writing mentor and a member of the board of directors for the Mystery Writers of America, she works hard to tell her own stories as well as those of others.

"My daughter is looking at me," she said. "She’s seeing that yes, you can be a nine-to-fiver, you can be someone’s wife and someone’s mom, but you can also be that person you were meant to be. I was always meant to be a writer."

For Hall, life is a case she wants to remain open.