The Tribune: SLO High Grad is Now a Groundbreaking Scientist

Reporter Nick Wilson from The Tribune in San Luis Obispo, California, recently interviewed Cedars-Sinai postdoctoral fellow Samuel Sances, PhD, about the dramatic diving accident that inspired Sances to enter medical research. In a front-page story, Sances, a graduate of San Luis Obispo High School, discussed the accident and his pioneering stem-cell research and images, which are featured in the January 2019 issue of National Geographic magazine.

Sances related how, as a self-professed "adrenaline junkie" at age 16, he decided to jump from a high cliff into the Santa Ynez River, hitting into the water so hard that he broke a vertebra in his back. Temporarily paralyzed from the waist down, he said he overhead a doctor say he would never walk again.

Sances credited the conservative approach of local physicians, who eschewed immediate surgery, for his full recovery, which found him tearing down the slopes on a snowboard a few months later. "Their philosophy was to let the body heal itself. That experience gave me an exposure to know that there’s a lot to be learned from health care," Sances told The Tribune.

The article describes how Sances, now 31, is dedicating his career to helping those who are disabled and diseased — having received a sense of what it would have been like to be immobilized.

His research at the Cedars-Sinai Board of Governors Regenerative Medicine Institute involves engineering adult skin or blood cells into cells that can make cells of any organ, including the spinal cord and brain. These organ cells are then placed in small tissue-chip devices that mimic the body’s functions. Using these chips, scientists can study diseases and, potentially, test drug treatments for patients with amyotrophic lateral sclerosis (ALS), Parkinson's disease and other disorders.

"I feel like the next discovery is right around the corner," Sances said. "My dream is for this technology to touch many lives."

Click here to read the complete article in The Tribune. 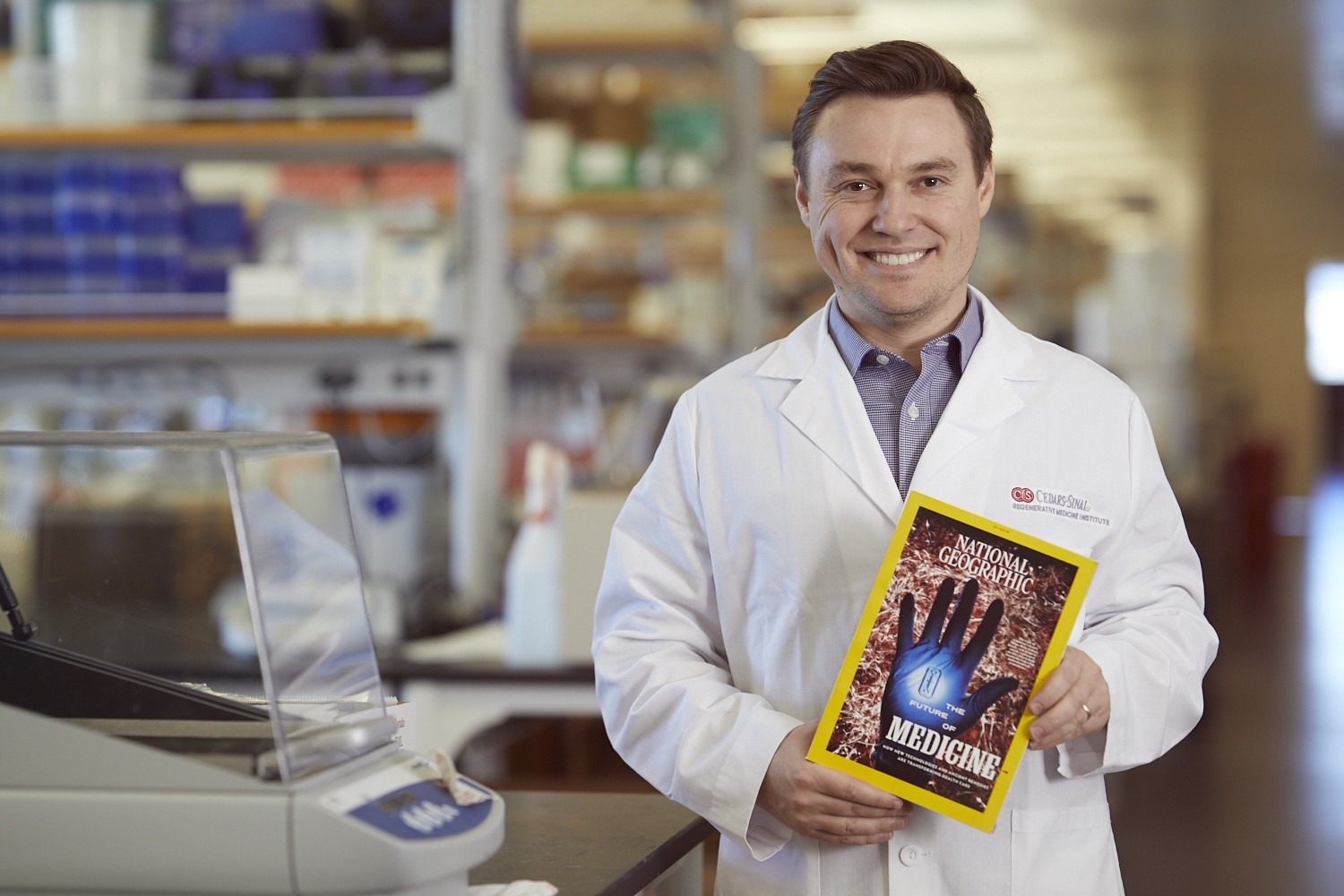 Samuel Sances, PhD, with the National Geographic issue that profiled the work of the Board of Governors Regenerative Medicine Institute. Photo by Cedars-Sinai.

Cedars-Sinai has launched a center to manufacture the next generation of stem cell and gene therapies that will enable biomedical researchers, government medical programs, commercial entities and others to develop new biologic drugs and propel novel …
Read more

A new study shows that SARS-CoV-2, the virus that causes COVID-19 (coronavirus), can infect heart cells in a lab dish, indicating it may be possible for heart cells in COVID-19 patients to be directly infected by the virus. The discovery, published …
Read more

Is the future of personalized medicine out of this world? Cedars-Sinai is trying to find out by launching special stem cells into space to see if they multiply better there.The Cedars-Sinai Board of Governors Regenerative Medicine Institute is …
Read more

The Tribune: SLO High Grad is Now a Groundbreaking Scientist