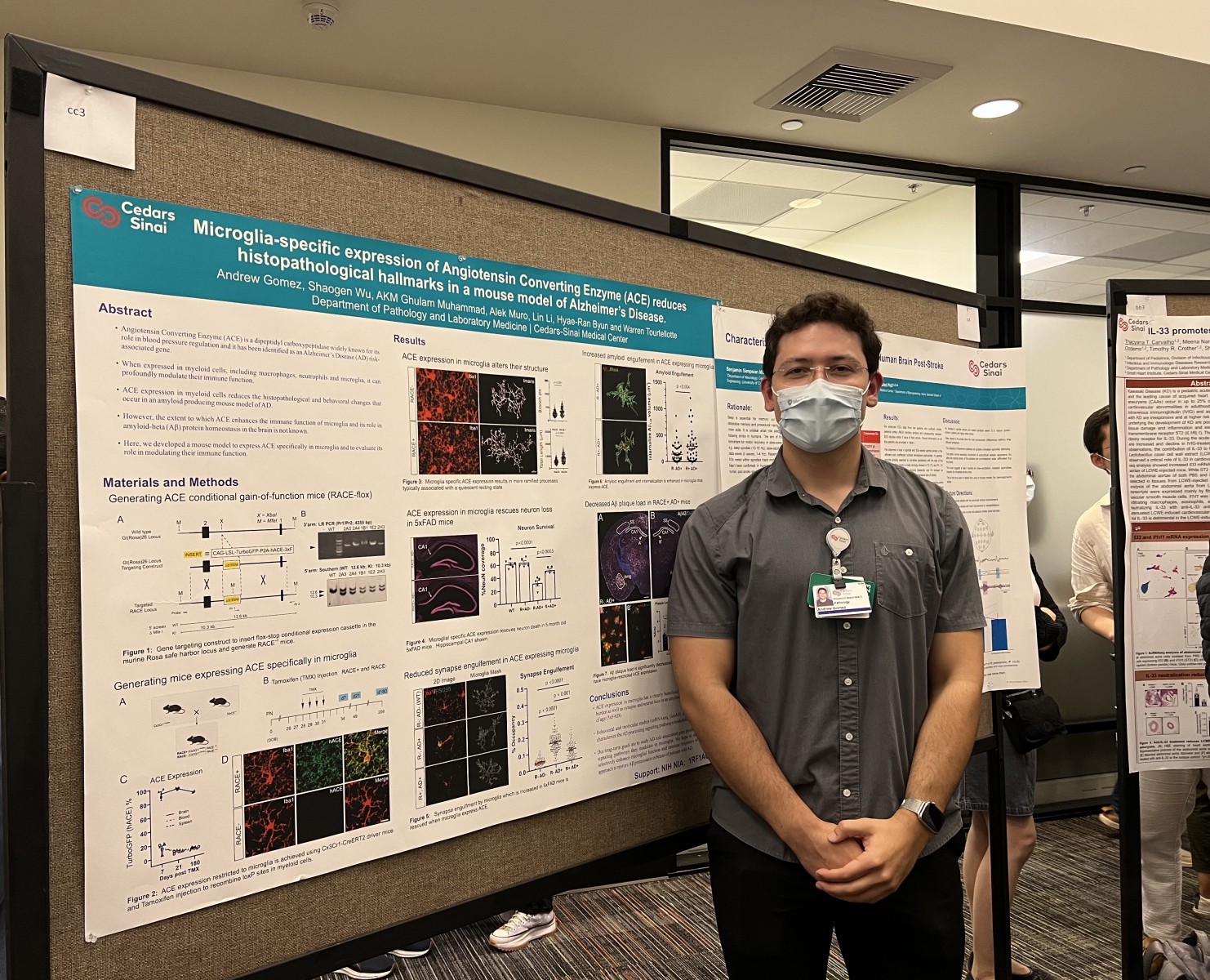 Investigators took a break from their laboratory work to share their research, network with colleagues and learn from a distinguished guest speaker during Cedars-Sinai Research Day on Oct. 14.

More than 350 Cedars-Sinai investigators came together for a series of events that included a lecture by Virginia Man-Yee Lee, PhD, the John H. Ware 3rd Endowed Professor in Alzheimer’s Research at the University of Pennsylvania.

During her keynote address, Lee summarized the results of her more than four decades of research into neurodegenerative diseases. Together with her husband, the late neuro-pathologist John Q. Trojanowski, MD, PhD, Lee has led research showing that certain proteins abnormally cluster in the brains of people with disorders such as Alzheimer’s disease, Parkinson’s disease and amyotrophic lateral sclerosis. Lee and colleagues developed several models of neurodegenerative diseases in laboratory mice. They have reported that diseased proteins can misfold in a cell, causing them to abnormally clump together, and that these misfolded proteins can be transmitted from one brain cell to another.

“There are many different ways that you can target these abnormally folded proteins, and you can actually even promote their degradation,” Lee said to a full audience in the Harvey Morse Auditorium. “We just have to be clever and think of ways to come up with therapies.”

Understanding neurodegenerative diseases is critical to advancing therapeutic strategies, considering the aging population in the U.S. and the world, which have seen an increase in the number of individuals suffering from a neurodegenerative disease, said Jeffrey A. Golden, MD, vice dean of Research and Graduate Education and director of the Burns and Allen Research Institute at Cedars-Sinai.

“Lee’s work has given us new insight into how neurodegenerative diseases actually progress so we can begin thinking about therapeutics that block their pathobiologic pathways and prevent the progression of disease,” said Golden, who is also professor of Pathology and Laboratory Medicine and Biomedical Sciences at Cedars-Sinai.

Golden also noted that Lee’s collaboration with her husband, who was also a clinician, is an example of how combining basic science with patient cases can lead to new knowledge. “Cedars-Sinai lives at that interface of basic science and clinical care,” Golden said. “That's really where we have the opportunity to make a difference in healthcare.”

Golden also pointed out that Lee’s approach challenged the doctrine that other neuroscientists have long believed, and he hopes her presentation will encourage other scientists to think differently. “You heard her say several times that dogma often isn't correct,” Golden said.

The Start of Something

After Lee’s presentation, the research community gathered at the North Campus to view posters for 189 research projects that are currently being conducted at Cedars-Sinai.

Several attendees said they were grateful for the opportunity to chat with investigators they don’t know or normally interact with. Research Day was put on hold during the last two years because of the COVID-19 pandemic.

Jinfen Xiao, PhD, a project scientist with the Samuel Oschin Cancer Center at Cedars-Sinai, said the poster session was her favorite part of Research Day. “It’s nice to meet people from different fields and get to know what research is going on,” Xiao said.

“I think we've been very separated over the last couple of years,” said Celina Shirazipour, PhD, assistant professor in the Department of Medicine and a research scientist at Cedars-Sinai, who showcased her lab's research on a virtual exercise program for older adults, as well as PTSD for cancer survivors. “But today I've already met so many people from different departments and talked about collaboration. It's that face-to-face time outside of our department that you don't get otherwise.”

This year, the committee also introduced a new award category for research that investigates sex as a biological variable:

Learn more about research at Cedars-Sinai.

Speeding Up Treatment for Pregnancy-Related Hypertension An initiative developed by Cedars-Sinai investigators improves the timeliness of treatment for women with severe pregnancy-related hypertension. The team also found race and ethnicity did not …
Read more