Renowned Surgeon Once a Conscripted Laborer for Nazis 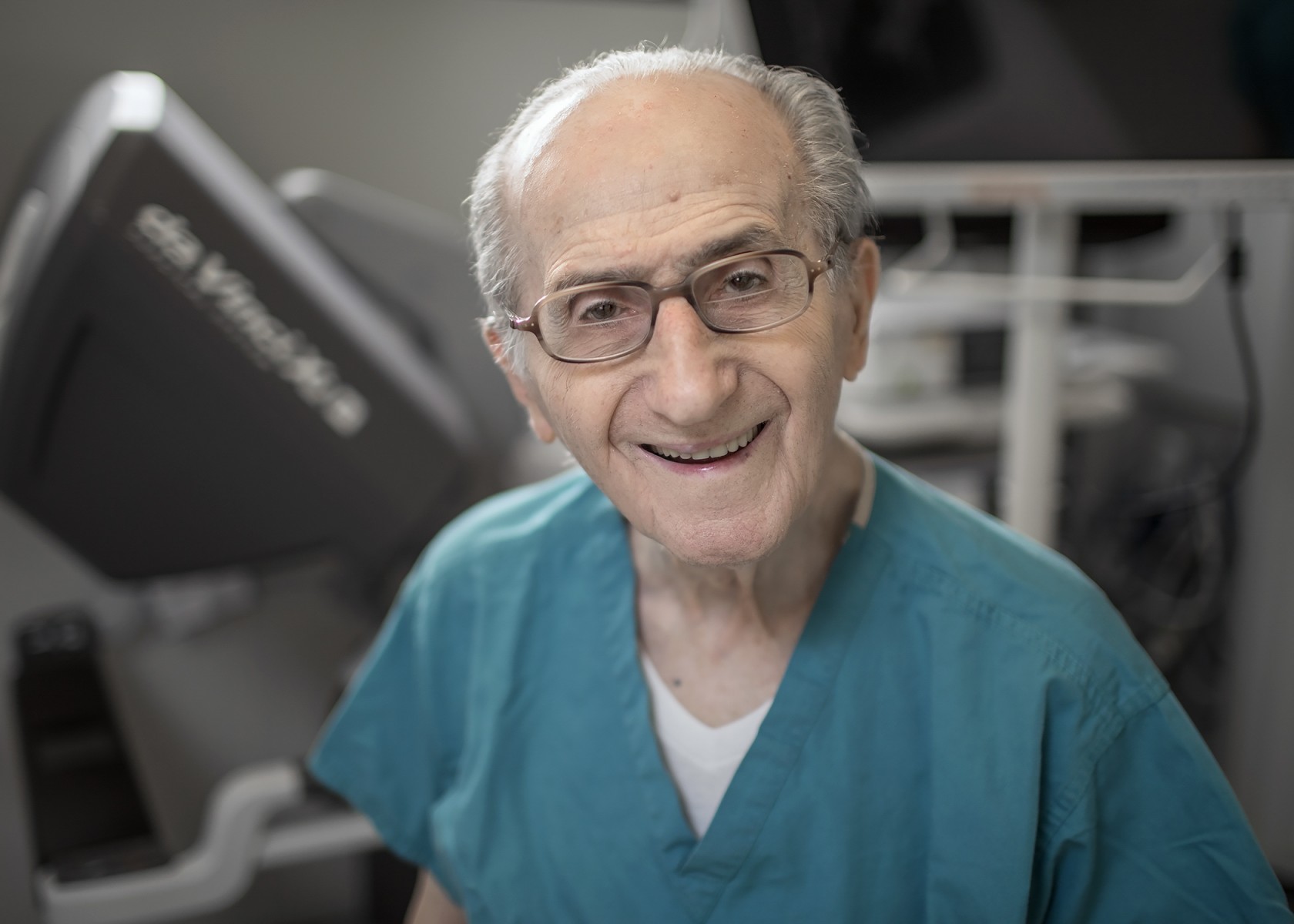 The first time George Berci heard a siren, he was 23 years old.

It was the summer of 1944, on the outskirts of Budapest, he was one of hundreds of Jewish conscripted laborers who were packed into a railroad car as human freight. They were bound for a concentration camp in Germany or Poland. Possibly Auschwitz.

But the train had come to a halt near the Hungarian capital. The train had been traveling many hours, and Berci thought it had stopped so the prisoners could be fed their meager rations.

Suddenly, the loud-pitched wail of sirens pierced the countryside air—followed by large explosions that shook the ground. British and American forces were strategically bombing Hungary in an effort to destroy Axis training facilities, aircraft and landing fields.

"Everybody disappeared," recalled Berci, 97, professor emeritus and a world-renowned Cedars-Sinai surgeon, who pioneered the development of endoscopic and laparoscopic surgery. "So, we disappeared, too."

On Wednesday, Cedars-Sinai will hold its 34th annual observance of Yom Ha’Shoah—Holocaust Remembrance Day. During a lunchtime program in Harvey Morse Auditorium, the solemn occasion will be marked by a candle-lighting service to honor the memory of the 6 million European Jews killed. The program also will feature a lecture by Wolf Bruner, professor of history at the University of Southern California and founding director of the USC Shoah Foundation Center for Advanced Genocide Research, about Jewish resistance during the Holocaust.

Berci, who spoke about his wartime experiences in calm detail during an interview in his North Tower office, realizes he easily could have been claimed by the horrible tragedy. For years, he has shared his remarkable story of survival with student groups including at the Museum of Tolerance. He currently is working on an autobiography.

"Unfortunately, I had a terrible early life in respect to being a Jew," said Berci, who is still a regular sight on the medical campus. "The next generation needs to know about what happened."

"Many people lost their faith. I didn’t. I think we have to separate our concept of God from what happened."

First Dream to be a Musician

Berci was born in March 1941 in Szeged, Hungary. When his father was hired as the assistant conductor of the Vienna Philharmonic Orchestra, his family—which included grandparents and other relatives—moved into a two-room Vienna apartment. The young Berci, an only child, wanted to be a musician. By age 10, he could play violin concertos.

But by the mid-1930s, fascism was on the rise, and Hitler came to power in Germany. In Austria, Berci remembers he and other Jewish students were forced to sit in the back of school classrooms, and his non-Jewish friends stopped speaking to him.

The family returned to Hungary, where anti-Semitism also was widespread. As a Jew, he could not attend public schools. With his family unable to pay the tuition for a private Jewish school, Berci washed cars on weekends to finance his own education.

In 1942, his schooling came to an abrupt end. He received a letter in the mail that would change his life and put him in daily peril until the final days of the war.

"The piece of paper said that I had to report immediately," said Berci. "And wear a yellow arm band."

Like thousands of other young men, Berci was conscripted as a laborer for the Hungarians, who were under the direction of the German army. About 30 percent of conscripted laborers died during the war from starvation, disease or at the hands of their captors.

One of their main tasks was to build defensive fortifications. They toiled from sunrise to sundown under brutal physical conditions. The laborers slept on concrete bunker floors, wore the same clothes daily for years and ate little. A day’s ration of food was a couple slices of bread, soup and black coffee.

"We starved," said Berci. "But our mortality rate was lower than a place like Auschwitz or other death camps for two reasons: one, we were young; two, they needed us to make their projects."

Winters were especially terrible. In the shadow of the Romanian mountains, Berci and hundreds of other workers had to dig anti-tank trenches when the ground was rock-hard because of bitter cold.

If someone got sick and requested medical attention, they usually were never heard from again. Berci recalled one young man who had epilepsy.

"The guards threw the guy out in the winter snow, and when we were able to go out to him hours later, he was dead," said Berci.

After a couple years, Berci was transferred to a railway center near the Polish-Czech border. His new job was to unload ammunition—crates of hand grenades, artillery shells and other explosives—from train cars onto trucks.

Berci remembers that he and his fellow workers would often be deliberately reckless with the explosives.

"We would throw the crates to the other guy, and we hoped it would explode," said Berci, who has three children and six grandchildren. "Sometimes, the German soldiers would say, 'What the hell are you doing?' But we didn’t care. It was hard to care about life by that point."

In the Hungarian Underground

While the air raid outside Budapest led to a temporary freedom in the woods, Berci was far from safe. He made his way back to the city and soon was recruited to work for the Hungarian underground.

Berci became part of a large-scale operation of forging papers organized by the Swiss Vice-Consul Carl Lutz, who helped saved the lives of thousands of Hungarian Jews by issuing false protective letters.

It was during this time that Berci discovered his father and grandfather had died, but that, miraculously, his mother and grandmother were alive. His skill at making false documents helped insure they would remain so.

Working in a Budapest cellar with no windows, Berci forged papers. But he also was called upon to deliver blank certificates to Jews in hiding throughout the city. The blanks required special instructions to fill out and stated the holder was Catholic—and therefore free to move about the city.

Berci carried the false documents around in a briefcase. Had he been stopped by German or Hungarian fascists, he would have been killed."This was extremely dangerous," said Berci. "But I did it because it had to be done."

When the war was over, nearly two-thirds of Hungarian Jews were dead—either murdered by Axis troops or deported and killed in the death camps."Many people lost their faith," recalled Berci. "I didn’t. I think we have to separate our concept of God from what happened. We have to think about what our fault is. We could have organized against Hitler."

Once liberated, Berci wanted to pursue his dream of being a musician. In the chaotic aftermath of war, his mother didn’t like the idea.

"You will be a doctor," Berci remembers his mother flatly telling him in 1945. "This was a time when we listened to our parents. Of course, I’m very happy about this decision today."

Postwar and the Hungarian Uprising

Berci stayed in Hungary and later earned a medical degree from the University of Szeged in 1950. He continued surgical training before moving to Budapest in 1953, where he helped establish an experimental surgical division.

In 1956, the Soviet army marched into Budapest to crush a Hungarian revolt against the Communist regime. After a fierce battle near the Parliament building, hundreds of causalities poured into his nearby hospital, Berci said. After two straight days of administering treatment, doctors ran out of basic medical supplies and blood.

"We weren’t trained in trauma," he said. "Everybody was bleeding. It was terrible."

After that tragic episode, Berci said he knew he had to leave Hungary. He gathered his family, including his elderly mother, and slipped across the border to Austria.

"There was no difference between one system or the other," said Berci of the Nazis and Communists. "Dictatorship is dictatorship. If individual freedom is interfered with, then this is not the way of life."

In 1956, Berci won a Rockefeller Fellowship in surgery and moved to Australia. A little more than a decade later, Berci’s reputation for medical innovation and research caught the attention of Leon Morgenstern, MD, the founding director of Surgery at Cedars-Sinai. In 1967, Berci was recruited to join the Department of Surgery as a visiting scholar. In 1970, he joined the faculty full-time as the director of a multidisciplinary surgical endoscopy unit, a new idea at the time.

It was at Cedars-Sinai that Berci pioneered developments that led to a medical revolution of minimally invasive surgeries and transformed outpatient care.

"I was very lucky to come to Cedars-Sinai," said Berci. "Very lucky."

Renowned Surgeon Once a Conscripted Laborer for Nazis