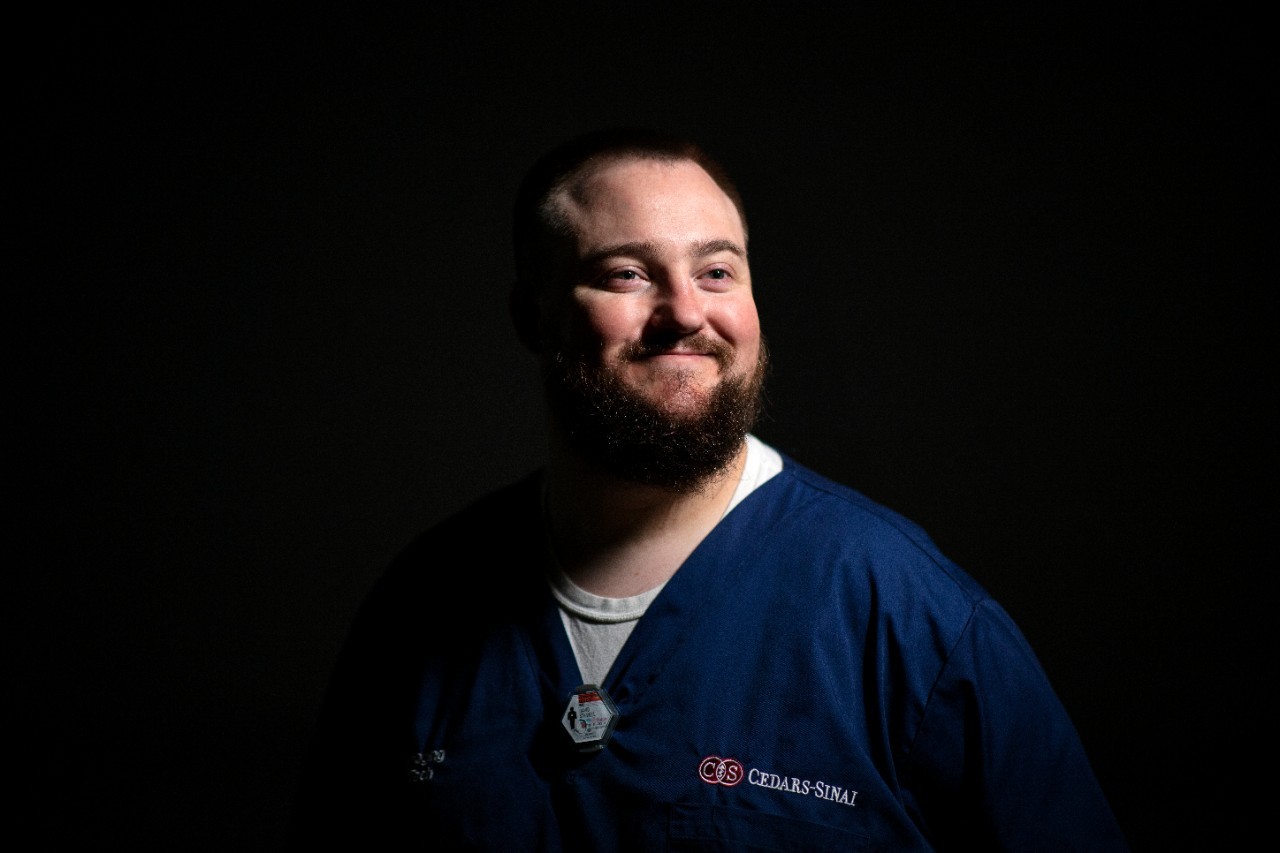 Cedars-Sinai radiologic technician David Stilwell was a U.S. Army cavalry scout deployed in Iraq for a 12-month stretch that began in October 2009. Photo by Cedars-Sinai.

As a U.S. Army cavalry scout deployed in Iraq for a 12-month stretch that began in October 2009, David Stilwell came under fire several dozen times.

He recalls the isolation of being posted at forward operating bases in "the middle of nowhere," living for days "on Pop Tarts and beef jerky."

Yet Stilwell is thankful for his time in the military. He gained teamwork skills that serve him well in his work as a radiologic technologist in the Cedars-Sinai Medical Network and shaped his perspective on life for the better.

"If I could survive war, then I can survive whatever issues come up here," Stilwell said. "I don't sweat the little things anymore." 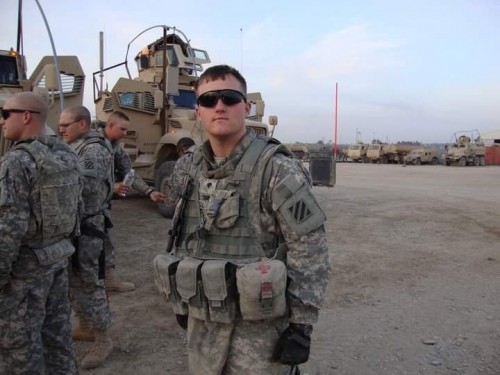 At the same time, Stilwell says combat took a psychological toll on him and was particularly tough on some of his friends. It frustrates him that the federal government doesn't do more for those veterans badly in need of mental healthcare.

Stilwell, 33, says his interest in serving in the military was kindled by the Sept. 11, 2001, terrorist attacks. "When 9/11 happened, I was in the ninth grade, and I remember sitting in my social studies class watching the Twin Towers fall. Ever since that day, I can always remember wanting to join the service. I always wanted to do my part," he said.

Restless as a youth, Stilwell left high school at age 16. He later earned a GED diploma, worked in construction and enrolled in community college in the San Fernando Valley, where he grew up and still lives.

By age 21, he joined the Army, and headed off to boot camp in October 2008 on his mother's birthday. "She was not very happy with me," Stilwell recalled.

After a year, in October 2009, he was off to Iraq. As a cavalry scout, he was involved in reconnaissance, foot patrols and other combat operations. Within weeks of stepping foot in Iraq, he was stationed at the first of the remote combat outposts where he spent much of his time while in the country.

"There were no modern amenities, nothing. It's just you and your platoon out there," Stilwell said. At one point, he said, much of the outpost's food supply went bad and "we actually were eating Pop Tarts and beef jerky for like two weeks."

The outpost also was rocked, in the first week Stilwell was there, by a violent blast about a mile away. It turned out to have been from a VBIED—a vehicle-borne improvised explosive device, or car bomb—and the attacker was gone by the time Stilwell and other troops arrived at the site.

Stilwell said his unit showed no outward sign of fear. "You knew you were going to be there for a year. There was no going back even if you wanted to, and then you had to make a choice: You either curl up in a ball or you bring the fight to the enemy. And this was not a group to ever curl up in a ball. So that's what we did," he said. "We brought the fight to the enemy."

His other duties during his year in Iraq included pursuing "high-value targets" in crowded neighborhoods. "We would kick in a door and bring everybody outside and look for this person, look for bombs, look for guns, anything like that," Stilwell said. "Those are very long and tiring nights—very, very, long nights.”

As the U.S. military mission shifted from combat-focused Operation Iraqi Freedom to Operation New Dawn, Stilwell was part of the effort to train Iraqi troops to take the lead in defending the country. General David Petraeus, who then was overseeing the wars in both Iraq and Afghanistan, came by to inspect the training facility where Stilwell was stationed. Petraeus spoke to some of the soldiers, including Stilwell's group.

Stilwell said the experience "was absolutely amazing because that he's such an amazing person. He's a very genuine guy. I can't say enough nice things about the man."

Over the course of his year in Iraq, Stilwell said, there were "quiet times" and "high-action times."

"You can go a month, and no one's shooting at you. And then two weeks straight, you're going to get shot at twice, three times a day. You just never know," he said. "It's such a rollercoaster."

The emotional toll wasn't clear until Stilwell got on his flight out of Iraq on a C-130 transport plane bound for Kuwait. "I never felt so tired in my life because all of that weight was lifted. You were going from a combat zone to a green zone. You know it's over. You know you've made it," he said.

"There's nothing on this planet that will prepare you for what war does to you," Stilwell said. "You can be the most prepared person in the world, at least you think you are, but there's nothing you can do to truly prepare yourself because it will change you in so many ways that you would never, never think.

"Even though I did only one tour, I'm always grateful for the people that continue to go, the people that stayed in after I got out and the people that are still in today and who still continue to put themselves through it," Stilwell added. "Multiple tours can take a toll, and these people don't care. They just keep putting themselves on the line. A lot of people kind of don't understand it, and I don't expect them to because that's kind of the point. Everyone's got a purpose and a job. And this is their purpose. This is what they're fulfilling in life. They're doing it so other people don't have to."

There's nothing on this planet that will prepare you for what war does to you. You can be the most prepared person in the world, at least you think you are, but there's nothing you can do to truly prepare yourself because it will change you in so many ways that you would never, never think.

Stilwell recalls with sadness Army buddies who apparently suffered post-traumatic stress or other mental illness after their military duty and wound up taking their own lives. He said he believes the federal government has "fallen short" in providing adequate mental healthcare for veterans.

"There are too many people that come back and take their own lives," he said. "They survived war, but they don't survive their own mind when they come home. I'm not going to say it's easily preventable, because it's definitely not, even with all the right tools," Stilwell said. Still, he added, "I do believe that our government owes veterans a lot more than what they're doing now."

Stilwell said he has managed to cope with his own psychological trauma from Iraq, but his transition to civilian life still was difficult. He spent a while living at home with his parents, out of work, and not sure what to do next.

Encouraged by his girlfriend at the time, who now is his wife, Stilwell started looking at local college programs and decided on a career school where he studied to be a medical assistant. Right after that, he enrolled in, and completed, an X-ray technician program, and later earned his radiologic technologist, or RT, credential.

In March 2018, Stilwell joined Cedars-Sinai Urgent Care, and he currently divides his time between the Wilshire Boulevard location in Beverly Hills and the Culver City site.

Stilwell's supervisors praise the way he treats patients. "I've seen little kids run up and jump into his arms and hug him. He just has this way with people, especially children," said his direct supervisor, Anne Siegman, LVN, a clinical operations supervisor for Cedars-Sinai Urgent Care.

His supervisors also say Stilwell rarely, if ever, talks about his military experience, but they see a hint of his background in his interaction with co-workers. "He's almost protective over the staff," Siegman said.

"He's always right there saying, 'Don't worry about this, I've got your back,'" she added.

Harold Swartz, RT, manager of imaging for the medical network, offered a similar view. "If we're looking for some help from somebody, David is always the first to raise to his hand and say, 'Is there something I can do to help out?' He’s just a magnificent team player," Swartz said.

As baseball heads into the final weeks of the regular season, Cedars-Sinai has opened a special exhibit, "Take Me Out to the Ball Game, 100+ Years of Baseball Movies & Entertainment." It features hand-drawn posters of classic baseball-themed movies …
Read more
Share this release (opens in dialog)

Roma Gianchandani, MD,  has joined Cedars-Sinai as the new medical director of Diabetes Quality and vice-chair of Quality and Innovation.“We were extremely fortunate to have recruited Dr. Gianchandani from the University of Michigan, where she …
Read more
Share this release (opens in dialog)

Charles R. Kleeman, MD, director and chair of the first combined Division of Medicine of Cedars of Lebanon and Mount Sinai Hospital, died Sunday, Aug. 15. He was 97.A globally recognized authority on kidney and metabolic diseases, Kleeman was …
Read more
Share this release (opens in dialog)