Life for a parent with a baby struggling in a neonatal intensive care unit can be an emotional roller-coaster.

Whitney Schwartz knows that all too well. She and her husband, Randal Schwartz, went through the Neonatal Intensive Care Unit experience at Cedars-Sinai – with both of their children.

They had the rougher ride with their first child, Hazel, who recently turned 5. She was born just over 26 weeks into the pregnancy, weighing only 2 pounds, 3 ounces, and wound up staying in the medical center's NICU for 100 days.

Although Schwartz and her husband always felt that they were in good hands medically, “It was really, really scary, and felt to us like it was touch and go,” she said.

As a way of saying thank you for the care the children received, the family on Sunday participated in Cedars-Sinai’s 40th Annual Neonatal Intensive Care Unit reunion.

The event, held in the Harvey Morse Auditorium and organized with the help of the NICU Parent Family Centered Care Council, had the feel of a king-size, elaborate kids’ birthday party. The room was packed with more than 500 NICU graduates and their families, and balloons were everywhere. Children, many in superhero garb, flocked to the face-painting table, and the Los Angeles Rams’ mascot, Rampage, posed for photos.

The focus, though, was on giving a chance for the NICU graduates and their parents to reconnect with their NICU doctors, nurses and other staffers.

Leah Padow -- whose nearly 4½-year-old son, Eli, spent three months in the NICU after being born early – described the reunions as “part of the healing process.”

Padow said she had grown close to the people who cared for Eli in the NICU. When she and her family attended the reunion for the first time in 2015, she remembered feeling that “you want to show them, ‘Here he is. He’s doing great, and this is because of you, and you deserve to see that.’”

Schwartz expressed a similar view. “We like to come so that we can show them our kids, and say, 'Look what you gave us.'” Like Padow, Schwartz is a member of the NICU Parent Family Centered Care Council at Cedars-Sinai, which supports families with a child in the NICU.

Charles F. Simmons, MD, chair of the Department of Pediatrics and director of the Division of Neonatology, said he and his colleagues appreciate that sentiment. “It’s the kind of positive feedback that we all need from time to time to remind us why we went into the field in the first place," he said. 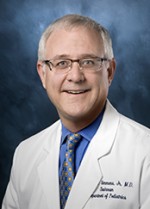 Some of our tiniest babies had over a 95% mortality rate (40 years ago), and today those same babies have over a 95% survival rate.

Simmons noted that over the past 40 years, 25,000 babies have received care in Cedars-Sinai’s NICU. Over that period, he said, there has been “amazing” progress in the field. Nationally, he said, "Some of our tiniest babies had over a 95% mortality rate, and today those same babies have over a 95% survival rate.”

It’s not only the medical staff and the families of NICU graduates who appreciate the reunions. The events also can provide a lift for families with a child still in the NICU.

When the last reunion was held in 2017, before going on hiatus for a year, Stacey Cochrane and her husband, Andrew Cochrane, were spending long hours in the NICU with their now 2-year-old son, Conor. They were in the late stages of what turned out to be a seven-week stay in the NICU for Conor, who was born 33 weeks into the pregnancy.

So when families arrived with their NICU graduates – including toddlers as well as teenagers -- it “gave us some strength, to see that path forward,” she said.

“You got a lot of, 'I’m 18 years old and a football star,’ and 'I'm in 3rd grade and have the highest grades in my class.' All of these things you worry about -- are they going to be OK? – and then there's all these stories of, yes, they can be OK. You can go through this very difficult experience and [the children] can end up 100% normal.”

As for Conor, Stacey Cochrane said, he might have a problem with asthma but otherwise doctors “haven’t been able to find any repercussions” from his premature birth, “which is really amazing.” She said, “He’s completely caught up developmentally-wise,” with his height at the 90th percentile.

That fortunate outcome motivated the Cochranes to shorten a long-awaited Big Bear vacation to get back in time for the reunion and express their gratitude to the people who cared for Conor. “You want all of these people who saw him at his worst ... to see this 2-year-old little boy who's just a normal little boy,” she said.

Read more on the Cedars-Sinai Blog: Former NICU Baby is Building a Career in Neonatology

Pioneering heart care is a tradition at Cedars-Sinai. It’s a tradition that took root in 1924, when Cedars-Sinai became home to the first electrocardiogram machine in Los Angeles. The roots grew stronger in the 1970s, when two Cedars-Sinai …
Read more