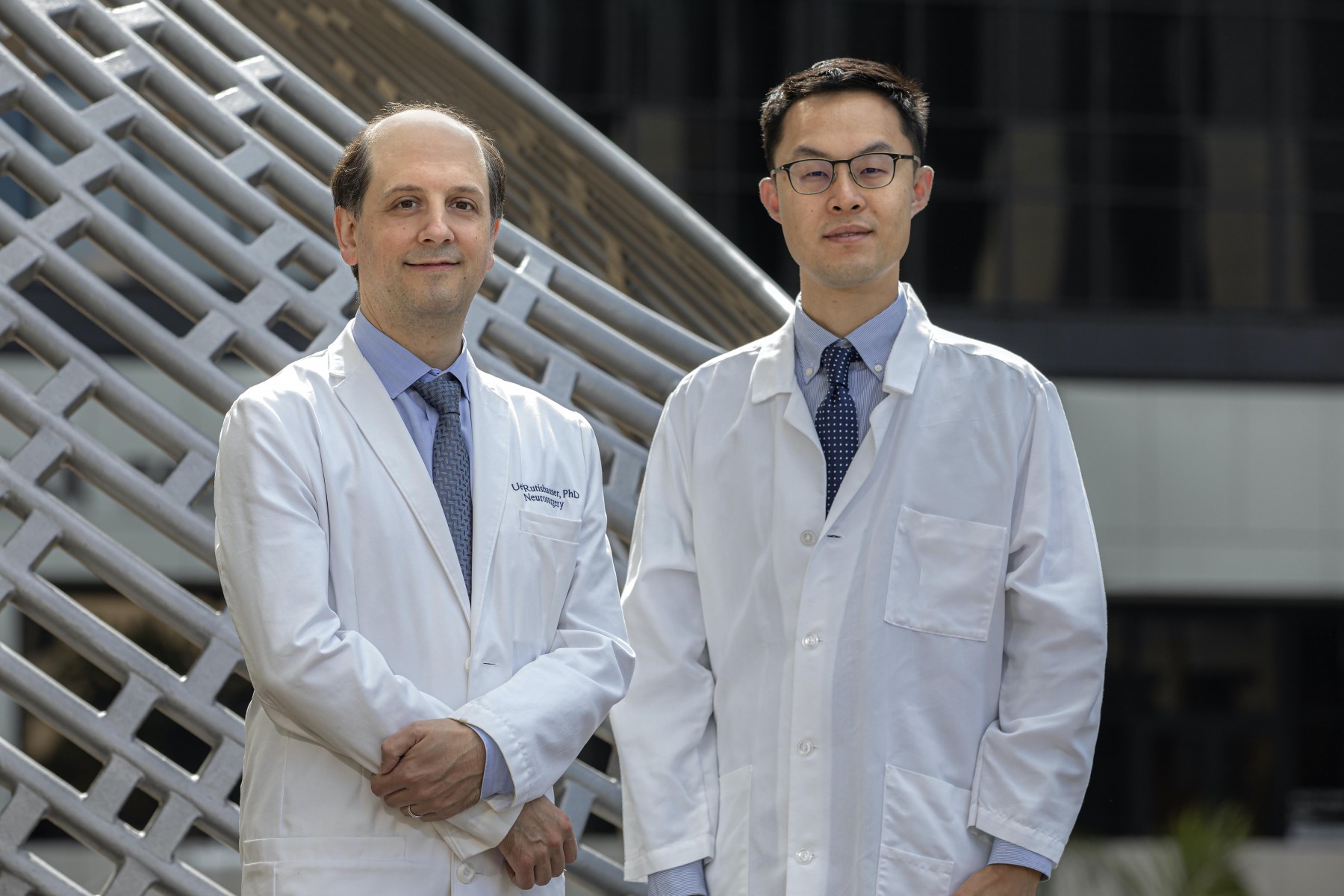 Ueli Rutishauser, PhD, (left) is director of the Center for Neural Science and Medicine at Cedars-Sinai, and Zhongzheng Fu, PhD, is a postdoctoral researcher in the Rutishauser Laboratory. Photo by Cedars-Sinai.

Researchers from Cedars-Sinai's Center for Neural Science and Medicine and Department of Neurosurgery have uncovered how signals from a group of neurons in the brain's frontal lobe simultaneously give humans the flexibility to learn new tasks—and the focus to develop highly specific skills. Their research, published today in the peer-reviewed journal Science, provides a fundamental understanding of performance monitoring, an executive function used to manage daily life.

The study's key finding is that the brain uses the same group of neurons for performance feedback in many different situations—whether a person is attempting a new task for the first time or working to perfect a specific skill.

"Part of the magic of the human brain is that it is so flexible," said Ueli Rutishauser, PhD, professor of Neurosurgery, Neurology, and Biomedical Sciences, director of the Center for Neural Science and Medicine, the Board of Governors Chair in Neurosciences and senior author of the study. "We designed our study to decipher how the brain can generalize and specialize at the same time, both of which are critical for helping us pursue a goal."

Performance monitoring is an internal signal, a kind of self-generated feedback, that lets a person know they have made a mistake. One example is the person who realizes they drove past an intersection where they should have turned. Another example is the person who says something in conversation and recognizes as soon as the words are out of their mouth that what they just said was inappropriate.

"That 'Oh, shoot' moment, that 'Oops!' moment, is performance monitoring kicking in," said Zhongzheng Fu, PhD, a postdoctoral researcher in the Rutishauser Laboratory at Cedars-Sinai and first author of the study.

These signals help improve performance on future attempts by passing information to areas of the brain that regulate emotions, memory, planning and problem-solving. Performance monitoring also helps the brain adjust its focus by signaling how much conflict or difficulty was encountered during the task.

"So an 'Oops!' moment might prompt someone to pay closer attention the next time they chat with a friend or plan to stop at the store on the way home from work," said Fu. 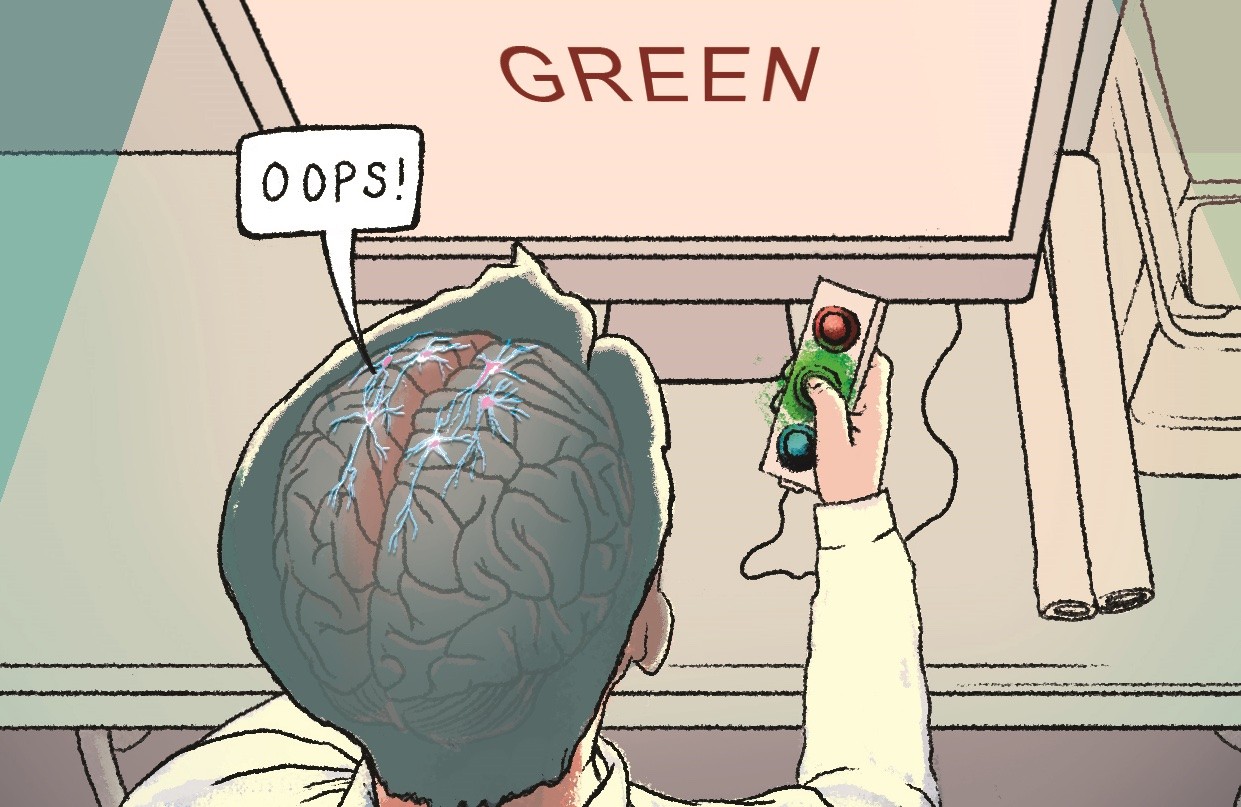 To see performance monitoring in action, investigators recorded the activity of individual neurons in the medial frontal cortex of study participants. The participants were epilepsy patients who, as part of their treatment, had electrodes implanted in their brains to help locate the focus of their seizures. Specifically, these patients had electrodes implanted in the medial frontal cortex, a brain region known to play a central role in performance monitoring.

In the Stroop task, which pits reading against color naming, participants viewed the written name of a color, such as "red," printed in ink of a different color, such as green, and were asked to name the ink color rather than the written word.

"This creates conflict in the brain," Rutishauser said. "You have decades of training in reading, but now your goal is to suppress that habit of reading and say the color of the ink that the word is written in instead."

In the other task, the Multi-Source Interference Task (MSIT), which involves recognizing numerals, participants saw three numerical digits on screen, two the same and the other unique—for example, 1-2-2. The subject's task was to press the button associated with the unique number—in this case, "1"—resisting their tendency to press "2" because that number appears twice.

"These two tasks serve as a strong test of how self-monitoring is engaged in different scenarios involving different cognitive domains," Fu said.

As the subjects performed these tasks, the investigators noted two different types of neurons at work. "Error" neurons fired strongly after an error was made, while "conflict" neurons fired in response to the difficulty of the task the subject had just performed.

"When we observed the activity of neurons in this brain area, it surprised us that most of them only become active after a decision or an action was completed," Rutishauser said. "This indicates that this brain area plays a role in evaluating decisions after the fact, rather than making them."

There are two types of performance monitoring: domain general and domain specific. Domain general performance monitoring tells us something went wrong and can detect errors in any type of task—whether someone is driving a car, navigating a social situation or playing Wordle for the first time. This allows them to perform new tasks with little instruction, something machines cannot do.

"Machines can be trained to do one thing really well," Fu said. "You can build a robot to flip hamburgers, but it can’t adapt those skills to frying dumplings. Humans, thanks to domain general performance monitoring, can."

Domain specific performance monitoring tells the person who made the error what went wrong, detecting specific mistakes—that they missed a turn, said something inappropriate or chose the wrong letter in a puzzle. This is one way people perfect individual skills.

"We used to think there were portions of the brain dedicated to only domain general performance monitoring and others to only domain specific," Rutishauser said. "Our study now shows that’s not the case. We’ve learned that the very same group of neurons can do both domain general and domain specific performance monitoring. When you're listening to these neurons, you can read out both types of information simultaneously."

To understand how these signals are interpreted by other areas of the brain, it helps to think of the neurons as musicians in an orchestra, Rutishauser said.

"If they all play at random, the listeners—in this case the regions of the brain receiving the signals—just hear a garbled set of notes," Rutishauser said. "But if they play an arranged composition, it’s possible to clearly hear the various melodies and harmonies even with so many instruments—or performance monitoring neurons—playing all at once."

Too much or too little of this signaling, however, can cause problems, Rutishauser said.

"We believe the mechanistic knowledge we have gained will be critical to perfecting treatments for these devastating psychiatric disorders," Rutishauser said.