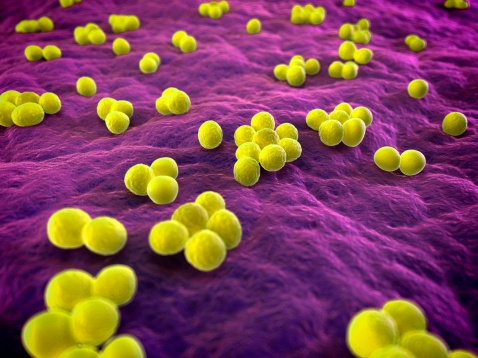 Los Angeles - Feb. 14, 2008 – Researchers have exploited a structural vulnerability in the “superbug” Staphylococcus aureus that in laboratory experiments and a mouse study opened the bacterium to treatment with an anti-cholesterol medication.

This follows the 2005 discovery that a pigment provides a “golden armor” that enables staph to evade the immune system. An article published Feb.14 in the online version of Science (Science Express) describes the study, which was conducted by researchers at Cedars-Sinai Medical Center, the National Taiwan University in Taipei, the University of Illinois at Urbana-Champaign, and the University of California, San Diego.

After treatment with the drug – which had progressed through preclinical testing in rats and two early clinical trials in humans as a cholesterol-fighting medication – staph bacteria were about 15 times more susceptible to killing by hydrogen peroxide and were four-fold less able to survive in human blood, according to George Y. Liu, M.D., Ph.D., one of the article’s co-first authors.

Liu directs a laboratory focusing on staph aureus research at Cedars-Sinai’s Immunobiology Research Institute. In a study of systemic staph infection, the researchers found a 50-fold decrease in bacteria in laboratory mice treated with the drug, said Liu, who also serves as an assistant professor of pediatrics at Cedars- Sinai.

Staphylococcus aureus is a bacterium that flourishes on the skin and in the nose of one in three people. It can cause a wide range of infections, from minor skin abscesses to life-threatening systemic infections. It is often considered a superbug because it is highly contagious and adaptive, and some strains have become extremely resistant to antibiotics.

These drug-resistant strains, called methicillin-resistant Staphylococcus aureus, or MRSA, are responsible for more deaths than HIV/AIDS in the United States and are increasingly found in schools and other community facilities in which people are in close contact. Because few new antibiotics with MRSA-fighting potential appear on the horizon, scientists are seeking alternative approaches.

In 2005, Liu and other researchers discovered that a pigment giving staph aureus cells their yellow-orange color – “aureus” is Latin for “golden” – actually fend off key immune system cells. Neutrophils and macrophages kill most bacteria, but staphyloxanthin, the staph aureus pigment, neutralizes their bacteria-killing chemicals.

“Initially, we were intrigued by this color and the pigment, which is a carotenoid pigment, similar to betacarotene found in tomatoes, carrots and bright-colored vegetables. Carotenoids in the diet and in vitamin tablets are thought to have antioxidant properties, meaning they may help protect human cells from harmful substances released when the cells use oxygen. We wondered if this carotenoid pigment could be protecting staph aureus from neutrophils and macrophages of the immune system,” said Liu, first author of the 2005 article that appeared in the Journal of Experimental Medicine.

At the time, he was a senior research fellow at UCSD, working with Victor Nizet, M.D., professor of pediatrics and pharmacy, who also was involved in the new study. After publication of the original “golden armor” study, which received international attention, Liu and Nizet were contacted by Eric Oldfield, Ph.D., professor of chemistry and biophysics at the University of Illinois, who recruited Andrew Wang, Ph.D., and other specialists in Taiwan to help study the crystal structure of the pigment-producing enzyme.

“He pointed out that a biochemical pathway that allows staph aureus to make the pigment is very similar, in the early steps, to the pathway that makes cholesterol,” Liu said. “If you compare the two pathways, you see that one of the initial enzymes required to make the staph aureus pigment is very similar to an enzyme for the cholesterol pigment.”

The researchers found that not only were the initial steps similar, but a drug designed to block the activity of the cholesterol-producing enzyme also was capable of binding to and interrupting the staphyloxanthinrelated enzyme. Stripped of its golden pigment, staph aureus became open to attack by immune system cells and bacteria-killing chemicals such as hydrogen peroxide.

About the time the first study was published, the National Research Council (NRC), acknowledging the limitations of antibiotics, conducted workshops on future approaches for treating virulent bacterial infections. Based in part on the potential recognized in that study, the NRC encouraged further investigation into the specific neutralization of bacterial virulence factors to render pathogenic bacteria susceptible to innate immune system clearance.

“Our latest work is a follow-up to the NRC’s recommendations, almost point by point,” Liu said. “Because of the collaboration of a group of scientists with expertise in different areas, we were able to identify a novel way of disarming the pathogen and making it more susceptible.”