Los Angeles - Dec. 23, 2013 - Physicians in the Neonatal Intensive Care Unit in the Maxine Dunitz Children’s Health Center launched a pilot study in which mothers’ breast milk is analyzed to determine whether premature infants are receiving the correct amounts of nutrients they need to thrive.

The study could lead to a new innovation in personalized medicine: individually optimized nutrition for the smallest patients.

Currently, the only way to determine if premature newborns are malnourished is to monitor their growth rate. If infants’ growth rates are lagging behind the norm, it is likely they are not receiving the nourishment they need, said Charles F. Simmons Jr., MD, chair of the Cedars-Sinai Department of Pediatrics and director of the Division of Neonatology. 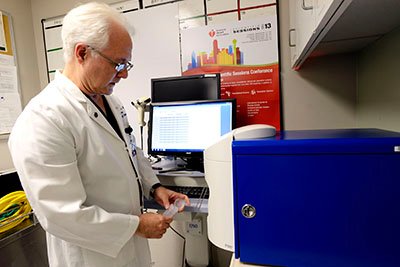 "We believe that analyzing mothers’ milk, and then adding food supplements accordingly, is extremely important to the smallest babies," said Simmons, the Ruth and Harry Roman Chair in Neonatology in Honor of Larry Baum. "For example, the pre-term babies who are the most challenged with weight gain are often the babies who are delayed in the development of neurological functions."

In the pilot study underway, researchers are examining babies weighing less than 1,500 grams or 3.3 pounds.

"In the past, all milk was fortified to be the same and it was one-size-fits-all," Simmons said. "Now, we are moving toward having the ability to personalize each mother’s milk to give her baby the precise nutrition the baby needs."

Mothers of the infants in the study provide a sample of breast milk. The sample is put into a device that filters the milk and performs a spectroscopic analysis of the liquid at wave lengths unique for each nutrient. When the analysis is complete, the machine gives a breakdown of the milk’s composition of proteins, fat and carbohydrates.

"This analysis lets us know which babies may need nutritional supplements, in addition to their mothers’ milk," Simmons said. "We hope this additional information could lead to more rapid weight gain and a quicker release from the hospital for these premature infants."