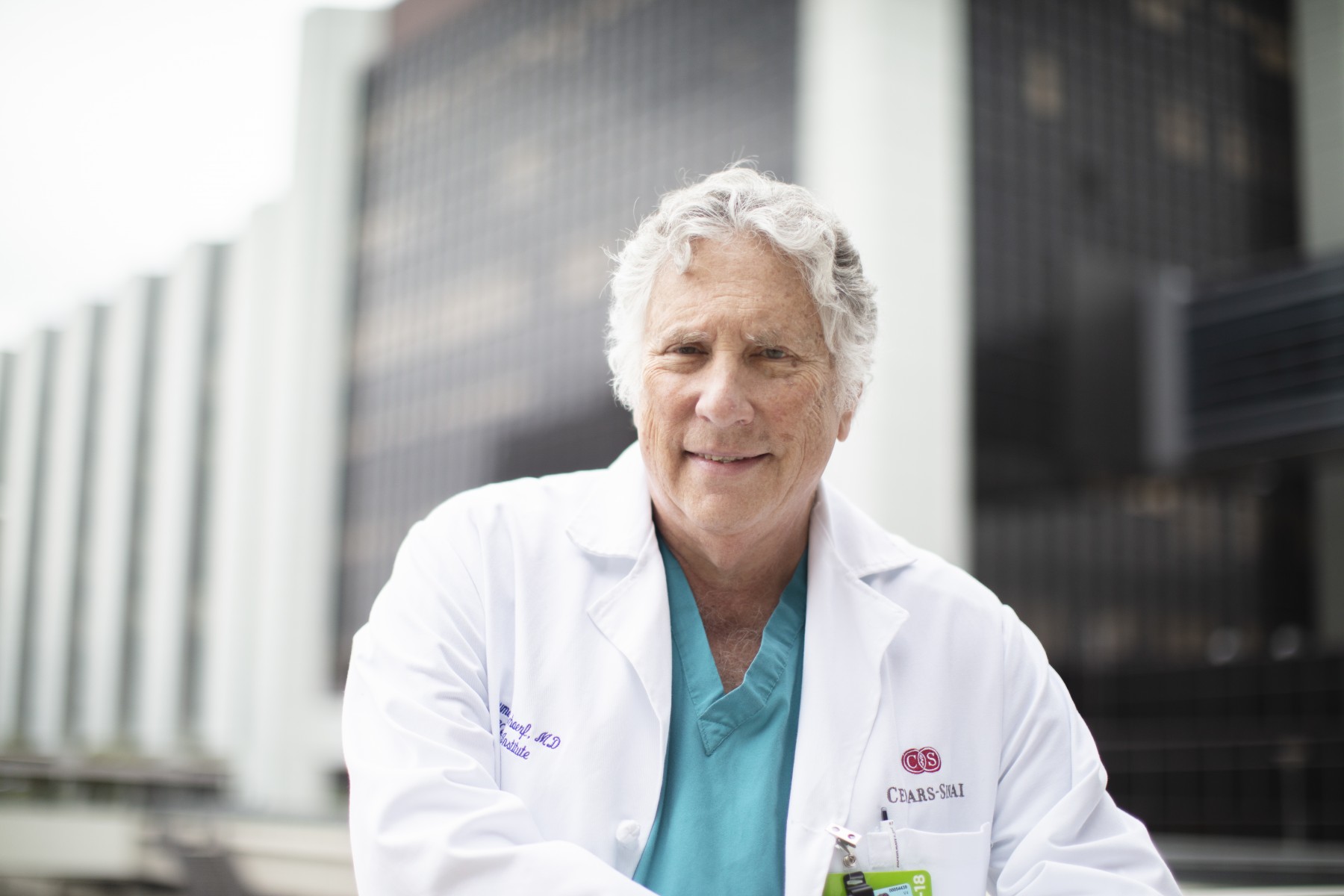 Raymond Schaerf, MD, is a cardiothoracic surgeon who specializes in performing delicate procedures to remove wires from old or malfunctioning defibrillators and pacemakers. Photo by Cedars-Sinai.

Raymond Schaerf, MD, a cardiothoracic surgeon, likes to joke that most people pack their cellphones with photos of their smiling children. His cellphone, however, is stocked with pictures of the human heart.

The photos are not Valentines and display the vital human organ in various states of distress and complication—those that can occasionally arise from implanted cardiac devices such as pacemakers and defibrillators. Schaerf specializes in lead extractions, a delicate procedure performed to remove wires that are old, malfunctioning, infected or causing a patient difficulty.

Schaerf, who joined the Smidt Heart Institute less than a year ago, recently sat down with Cedars-Sinai's Newsroom to talk about his work and his life outside of it. Below is an edited version of the conversation.

What is your main role at Cedars-Sinai?

Sometimes, with these devices, things can go wrong immediately. Other times, they’ve been in there for years and years, which makes it a lot harder to get them out. That’s why I get called in—to decide if extraction is necessary and to assess the risk.

It’s a complicated procedure with a lot of risks, but I’m in a place where some of the most incredible surgeries are performed by my colleagues. The care for patients here is outstanding.

How long do the surgeries take?

Usually from one to four hours.

How soon can a patient return to normal activities?

If it’s not an infection, sometimes people can go home and go back to work the next day. But some of my patients are in their 90s, and they have to take it easy. Infected patients need to stay at least three or four days to determine what organism caused the infection.

Still, it’s not uncommon to have someone fly in here for the surgery and then leave the next day. They could go back to work soon after that, but we usually restrict their activities for a while.

Why did you choose to become a surgeon?

I was going to be a nephrologist. My mentor was my father’s doctor. My father had kidney problems. I was really excited about it. And one day as a medical student, his partner asked me if I would like to do a peritoneal dialysis catheter implant. And I said sure. I’ll never forget this. The patient was a 35-year-old woman. She looked terrible because of renal failure and, mind you, this is 1970—and I’m trying to push this device in there and finally it pops in and I placed the catheter in there. My mentor’s partner asks me, “You want to put a purse string suture on that?” I said, “A who?” I had no idea. So, he showed me.

The patient got much better. I remember my feet didn’t touch the ground for about an hour afterward. I was walking on air. I thought surgery was very cool. I was hooked.

Do you have any hobbies?

Not anymore. But I do get addicted to some TV shows. Breaking Bad, The Good Wife, shows like that.

I was born in Romania but came to America when I was a baby. I was an only child, too. My parents would have dinners and all these eastern European refugees would be talking in different languages around the table. I wanted to learn the languages because I was curious what they were saying.

How did you get to Cedars-Sinai?

There’s no such thing as asking why someone wants to come to Cedars-Sinai, but I had some relationships with doctors for years. I’d met them at meetings and given a few talks and done some investigations with them. Also, I did extractions for them years ago.

And when a need came up here, they asked if I would consider coming here. I said, “Of course.” It’s a great place to be.

Heart Rhythm Disorders: What You Need to Know

Heart rhythm disorders like atrial fibrillation and sudden cardiac arrest have made headlines in recent months, prompting many to learn more about how the heart beats.“It is an exciting time in the field of cardiac electrophysiology, with many …
Read more

What is MINOCA? A Type of Heart Attack Mostly Affecting Women

Heart disease is the leading cause of death among women in the U.S., and a type of heart attack called myocardial infarction with non-obstructive coronary arteries (MINOCA), which predominantly affects women, is garnering increased attention.In …
Read more