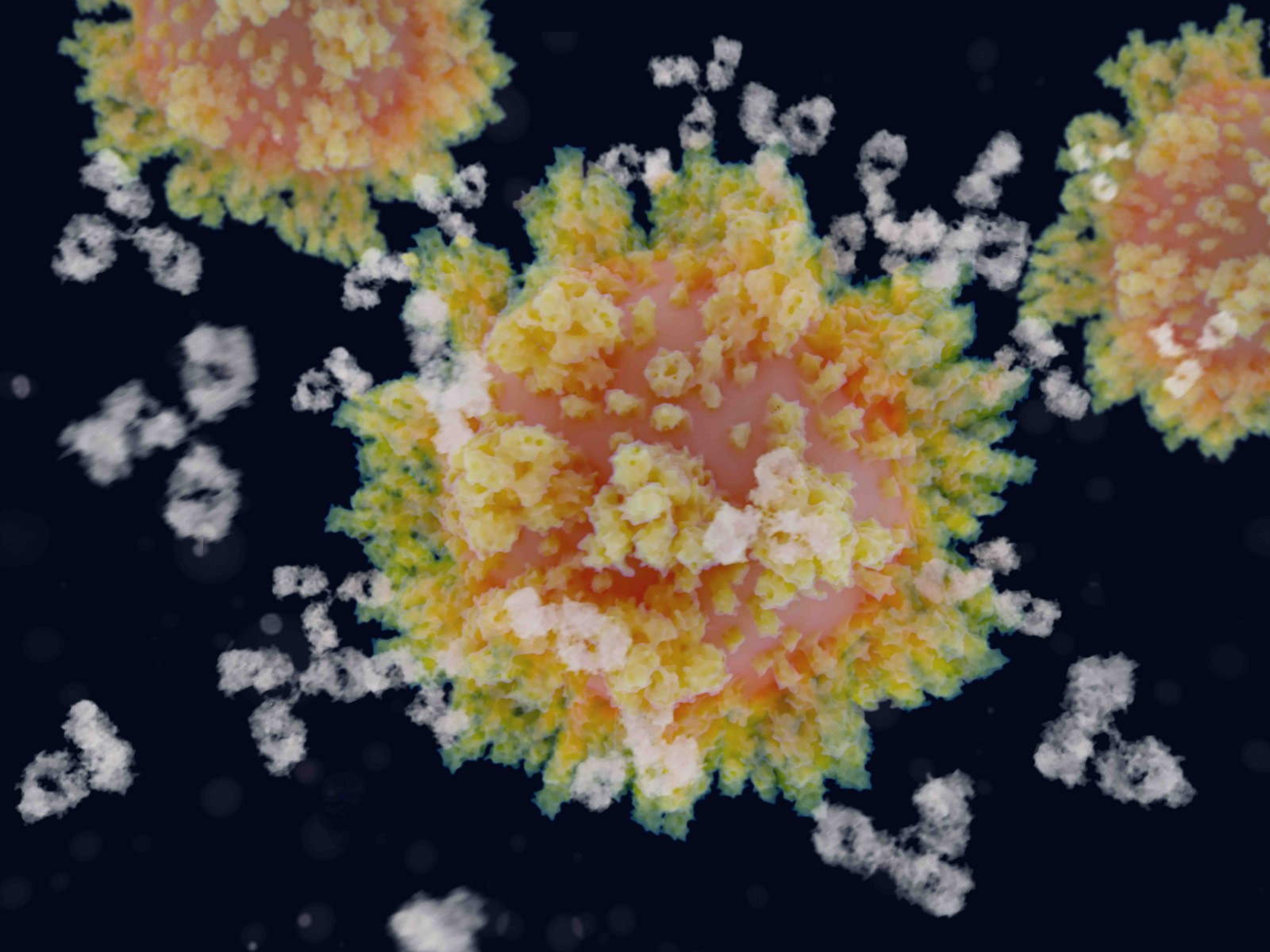 An illustration of antibodies (Y-shaped) responding to SARS-CoV-2 (orange), the novel coronavirus that causes COVID-19. Photo by Getty Images.
Antibodies responding to coronavirus particle. Illustration of antibodies (Y-shaped) responding to a coronavirus infection. Different strains of coronavirus are responsible for diseases such as the common cold, gastroenteritis and SARS (severe acute respiratory syndrome). The new coronavirus SARS-CoV-2 emerged in Wuhan, China, in December 2019. The virus causes a mild respiratory illness (Covid-19) that can develop into pneumonia and be fatal in some cases. As of March 2020, the virus has spread to many countries worldwide and has been declared a pandemic. Hundreds of thousands have been infected with tens of thousands of deaths. The coronaviruses take their name from their crown (corona) of surface proteins, which are used to attach and penetrate their host cells. Once inside the cells, the particles use the cells' machinery to make more copies of the virus. Antibodies bind to specific antigens, for instance viral proteins, marking them for destruction by phagocyte immune cells.

National Geographic recently interviewed Moshe Arditi, MD, professor of Pediatrics and Biomedical Sciences at Cedars-Sinai, about multisystem inflammatory syndrome in children (MIS-C), a serious condition that can affect some younger COVID-19 patients and may be linked to a similar condition in adults.

Early signs of multisystem inflammatory syndrome include fever, rashes, abdominal pain, diarrhea and vomiting. Although the condition is rare, it can worsen quickly and sometimes be fatal.

When doctors first encountered these symptoms in young patients, they suspected Kawasaki disease, which causes inflammation in the blood vessels of children. Arditi, an expert on Kawasaki disease, told National Geographic there are clear differences between the two illnesses.

"Most MIS-C patients are older. The median age of the afflicted is 9, while Kawasaki patients are generally under 2," Arditi said. "They also carry higher levels of biomarkers – proteins found in blood tests – that predict inflammation levels, and they often experience severe abdominal pain to the point that the [cases] are confused with appendicitis."

Arditi and a team of researchers found that the virus that causes COVID-19, SARS-CoV-2, has a unique feature not seen in other known coronaviruses. A fragment of the virus shaped like a spike resembles bacterial toxins known as super antigens, proteins that generate excessive reaction from the immune system, according to National Geographic.

The spike fragments may explain why multisystem inflammatory syndrome can look similar to blood infections, such as sepsis and bacterial toxic shock syndrome, Arditi told the magazine.

"We finally found the viral spike segment that may induce all those immune responses" – not only in multisystem inflammatory syndrome but possibly in adult COVID-19 cases, Arditi said.

Click here to read the complete article from National Geographic.