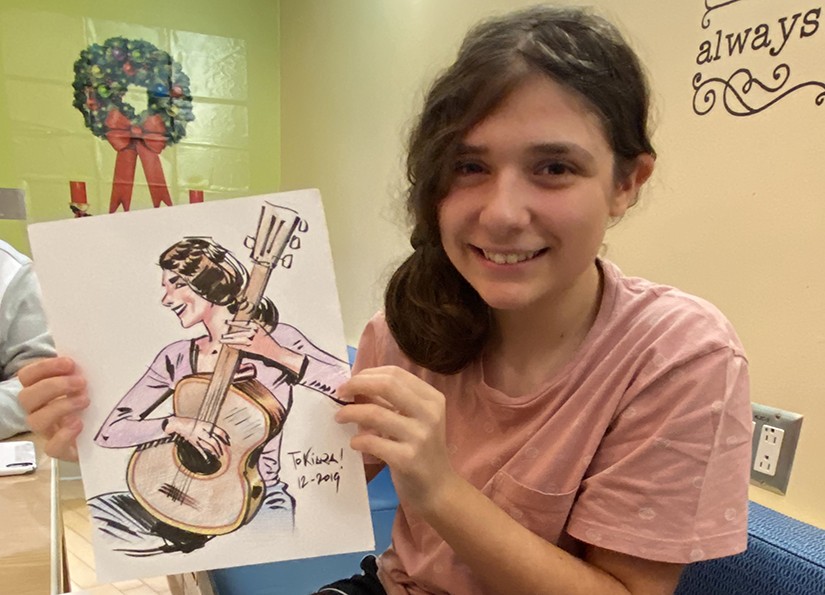 Cedars-Sinai pediatric patient Kiara Amalfitano said the drawing by a Lollipop Theater artist reminded her that she will go home and play her guitar one day soon. Photo courtesy of CNN.

While celebrities and guests enjoyed one of Hollywood’s biggest nights – the Golden Globe Awards – pediatric patients like Amalfitano had a star moment all their own at Cedars-Sinai. They had an opportunity to sit down with two DreamWorks Animations animators who drew personalized artwork for every patient they met.

“It’s hard to focus on stuff that makes you happy when there’s a lot of stuff that can make you sad,” said Amalfitano before she received her custom drawing. Amalfitano is admitted at Cedars-Sinai while being treated for Pediatric Autoimmune Neuropsychiatric Disorder Associated with Streptococcal Infections (PANDAS) – a sudden onset of neuropsychiatric symptoms including obsessive-compulsive disorder, tics and anxiety.

Amalfitano requested a drawing of a guitar but was surprised to see the finished result was not just a guitar, but a portrait of herself playing the instrument.

“It made me really happy,” said Amalfitano. “It made me remember that I’m going to be able to go home eventually and play my guitar again.”

Founded in 2002, LOLLIPOP has screened over 400 films and TV series for hospitalized children in more than 26 states, while also bringing other entertainment mediums like TV series and movies, a music program and collaborations with Nickelodeon, DreamWorks Animation and Blue Sky Studios and special celebrity visits.

Click here to watch the complete story from CNN Health.

Read more on the Cedars-Sinai Blog: CBD: Child's Cough: Is No Medicine the Best Medicine?

Daya’s Mystery: What Was Causing a Young Girl's Internal Bleeding?

The Dhillon family seemed to be living the California dream, enjoying the waterway just steps from their home on Naples Island. But a little more than five years ago, when their daughter, Daya, began feeling ill, the Dhillon family’s California …
Read more

Q&A: Advice for a Healthy, Stress-Free Return to School

Hyperactivation of the Immune System May Cause Post-COVID Syndromes

Investigators at Cedars-Sinai have proposed a theory for how SARS-CoV-2, the virus that causes COVID-19, infects the body. Their hypothesis, published in Frontiers in Immunology, could explain why some people still have symptoms long after the …
Read more