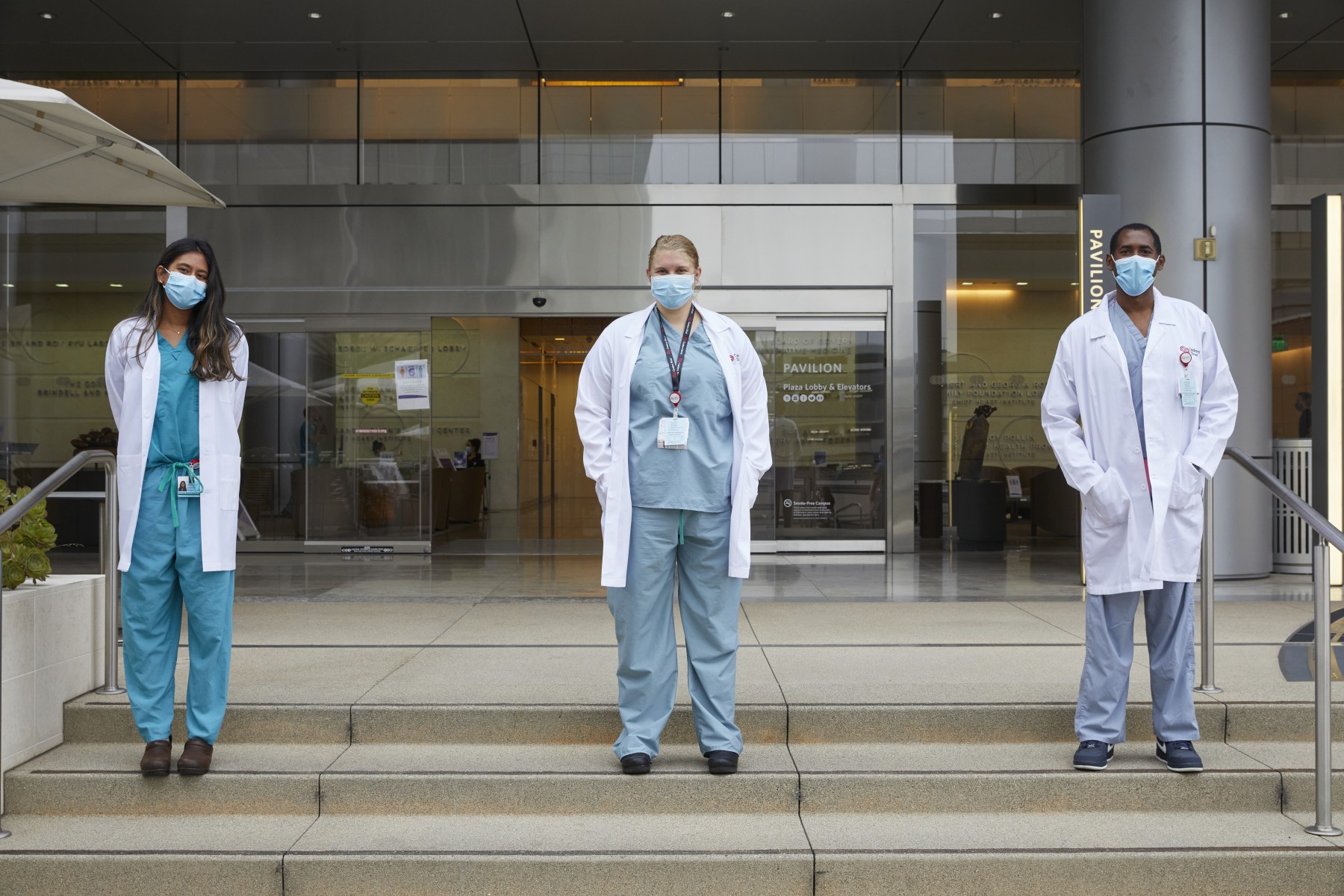 COVID-19 Challenges New Physicians as They Begin Their Medical Careers

When Maurice Turner, MD, was a young boy growing up in the San Diego area, his maternal grandmother would tuck him and his two older brothers into bed. Then she’d whisper into their ears, “I want you to become a doctor.”

His brothers went in other directions professionally, but Turner fulfilled his grandmother’s dream a month ago, receiving his medical degree from the Charles R. Drew/UCLA Medical Education Program. Turner’s grandmother influenced even his choice of a medical specialty as he intends to become a geriatrician. “I was the only one who listened to her,” Turner joked.

Today Turner is one of the 80 first-year residents just getting started at Cedars-Sinai and facing vastly greater challenges than previous classes of residents. Even in normal times, residents would be making “a big jump” from medical school, when “all patient care they are involved in is reviewed by multiple other physicians,” said Mark Noah, MD, Cedar-Sinai’s associate dean for Medical Education.

Yet these are far from normal times. The COVID-19 pandemic first disrupted the final months of many of the new residents’ medical school educations, and now is altering their experiences at the medical center. For example, orientation, with its customary meet-and-greets, was turned into a mostly online exercise.

COVID-19, Noah noted, isn’t the only big issue on the minds of the new arrivals. Residents are keenly aware that we are living through a possible inflection point in American history. Even as the nation struggles with the pandemic, which has disproportionately affected minority patients and raised the issue of health equity, Americans are reckoning with calls for social justice from protestors outraged by police killings of Black Americans, including George Floyd in Minneapolis.

“These protests are inseparable from the start of my career,” said Jayne Caron, MD, a new resident in obstetrics and gynecology who attended medical school at New York University.

In fact, social justice concerns helped Caron choose to specialize in obstetrics and gynecology. Along with working at a free medical clinic serving many low-income and undocumented immigrant patients during medical school, Caron also participated in research on gender-based violence. Caron also was one of the NYU volunteers who opted to finish medical school slightly ahead of schedule so she could help treat COVID-19 patients at the height of the crisis in New York.

Shruthi Nammalwar, a new resident in general surgery, said the Black Lives Matter movement has resonated with her. While attending the Geisel School of Medicine at Dartmouth, Nammalwar said, she was lucky to be with fellow students who were “warriors” for social and racial justice, which sharpened her understanding of some of the nation’s social problems.

Many of her colleagues and mentors, Nammalwar added, inspire not just with their knowledge and skills in medicine, but also “with their compassion.”

“It's just constantly inspiring not just to see what they're doing, but to think about what we can do in our roles as physicians,” said Nammalwar, who was president of the medical school’s student government during her final year at Dartmouth.

Nammalwar describes herself as someone who loves “being around people, connecting people, hosting people. It just brings me a lot of joy.”

The way she likes to relate with patients, though, is complicated by the COVID-19 pandemic -- especially the mask requirements. “What's been really challenging is going into a hospital where you can only see people's eyes. And as expressive as somebody's eyes are, it's really hard to interact and connect with people when you can't see their whole face,” Nammalwar said.

It has been particularly difficult, she said, “for someone like me, who's very much a people person and who very much remembers people by their faces.”

Turner, the Drew/UCLA graduate, relates closely to the calls for racial justice as well as to the COVID-19 crisis. As an African American, Turner said he has witnessed racial injustice and that his heart is with the demonstrators protesting such abuses.

But rather than risk arrest and jeopardizing his professional future, Turner said he regards his duty at this point in his life as being in the hospital “as a beacon for a lot of different minorities who don't necessarily have the same amount of trust toward the medical system as some other ethnicities.”

“I have to continue trying to be that that beacon and that person who, despite all that's going on, is still out there trying to bring people together.”

Does Back to School Mean Back to Flu?

With children back in school, doctors expect the flu to make a comeback as well.In 2020, when children stayed home and attended online classes, practiced social distancing and masked up, the flu …
Read more

'Broken Heart' Syndrome Is on the Rise in Women

Cedars-Sinai is taking a firm stance on vaccinations, releasing a multimedia campaign in support of COVID-19 vaccines and the scientists who developed them.The campaign, which includes eight weeks of …
Read more

Jewish Journal: Rabbi Jason Weiner—The Calm, Unanxious Presence
The Healthy: What It Means if You Have Heel Pain When Walking
Does Back to School Mean Back to Flu?
Conoce las Start Ups de Salud del Cedars-Sinai Accelerator
'Broken Heart' Syndrome Is on the Rise in Women
Neurologist to Lead New Cedars-Sinai Headache Clinic