The host of Cedars-Sinai's 19th annual Martin Luther King Jr. Day Celebration was then only 11 years old, and Burton's performance was in the multipurpose room of his elementary school in Sacramento.

But as Burton made clear during the virtual event held remotely this year because of the COVID-19 pandemic, his grade school anxiety wasn't ordinary stage fright.

The role itself, he said, "was so intimidating. You see, Dr. King was such a towering figure in my life, such a pillar of indomitable courage, strength and dignity, that I believed there was no way that I could even begin to approximate his character."

Burton went on to play the civil rights leader again—most notably, in 1999, when he won the Grammy Award for the best-spoken word album for his performance in the audio version of "The Autobiography Of Martin Luther King, Jr."

And while Burton's story about King's influence on his life was singular in some respects, it was only one of the program’s many reflections on the civil rights leader's extraordinary power to inspire. Tributes also came from Cedars-Sinai President and CEO Thomas M. Priselac, Keith Black, MD, chair of the Department of Neurosurgery, actor Sterling K. Brown and a host of Cedars-Sinai employees.

During the presentation, Burton thanked Cedars-Sinai employees for making a difference in keeping their community healthy but also emphasized that longstanding inequities persist in the nation's healthcare system—and that much work remains to be done.

Burton noted that in 1966 King told a meeting of the Medical Committee for Human Rights in Chicago that "of all the forms of inequality, injustice in healthcare is the most shocking and inhumane."

"You are a part of a very large team that cares for thousands of underserved individuals every year who turn to Cedars when they are sick," Burton said. "And when you do that, you are pushing back on inequality and injustice. When an individual is facing the inequities of this world, you play your part in giving them the gift of health. That is the very definition of making a difference. So, when I tell you that Dr. King would be inspired by you, that's a big reason why."

Priselac echoed that theme while paraphrasing King. He said the civil rights leader, who was slain in 1968 at the age of 39, believed that "everybody can be great because anybody can serve. You only need a heart full of grace and a soul generated by love. By fulfilling your role in our organization, you are serving. 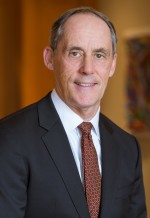 In the tumultuous days and weeks after the tragic death of George Floyd, each one of us had to ask ourselves where we stood. Were we simply watching history? Or were we participating in it? Were we willing to make difficult changes to advance justice and respect? Would we redouble our efforts to address the inequities in healthcare that caused needless suffering across our city? Our answer to those questions was, and is, yes—yes, as individuals and yes, as an organization.

"You may be caring for patients, preparing food, ensuring that rooms are clean, watching out for our safety and security, or working on campus or from home to support the functions that are vital to our institution. Whatever your role, if Dr. King were here to see you in action, I believe he would tell you emphatically that you make a difference."

Priselac added that King cherished courage and action. He said the ultimate measure of a person is not where they stand in moments of comfort and convenience, but where they stand at times of challenge and controversy.

“In the tumultuous days and weeks after the tragic death of George Floyd, each one of us had to ask ourselves where we stood," said Priselac. "Were we simply watching history? Or were we participating in it? Were we willing to make difficult changes to advance justice and respect? Would we redouble our efforts to address the inequities in healthcare that caused needless suffering across our city? Our answer to those questions was, and is, yes—yes, as individuals and yes, as an organization."

Black, co-chair of Cedars-Sinai’s King program, told a personal story of growing up in Tuskegee, Alabama, facing the kinds of discrimination that King battled to overcome.

Born in 1957, the neurosurgeon lived in a racially segregated neighborhood and began his education at an all-Black school. He entered an integrated classroom for the first time in fifth grade, as pressure from the early civil rights movement was starting to break down racial barriers in public education in the Deep South.

Black said he always loved science, and he did well in the subject in his integrated class. Yet, he said, "It was really sort of the first time that I encountered teachers who would not evaluate me on my merit.

Thanks to his nurturing parents, Black said, he was prepared "for dealing with those sorts of conflicts that I would encounter in life. And I understood that I would have to be better, that I couldn't be just as good, to get the same sorts of evaluations. And that was OK, because, actually, I think in the end, it made you better."

In the early years of Black’s life, King was working to make life better for everyone in Alabama. One major example came in the notoriously segregated city of Birmingham, where King's Southern Christian Leadership Conference organized to fight for integration at the city's lunch counters, schools and other public facilities.

For his efforts, King was thrown into jail that April where he penned his famous "Letter From a Birmingham Jail." One of its lines lived on to become one of King's most memorable quotations: "Injustice anywhere is a threat to justice everywhere."

Ahead of World Stroke Day, Oct. 29, investigators from the Department of Neurology at Cedars-Sinai have new information on stroke-related health disparities. In a study published in the peer-reviewed journal Scientific Reports, they determined that …
Read more

Racial and ethnic minorities in Los Angeles County are more likely to live as far as or farther than five miles from a cardiac rehabilitation facility, according to a new study by investigators at the Smidt Heart Institute at Cedars-Sinai. The …
Read more