Los Angeles - April 4, 2013 – A new iPad® program in the Maxine Dunitz Children’s Health Center at Cedars-Sinai is enabling mothers to bond with their newborns soon after delivery – even when parent and child are hospitalized on different floors. 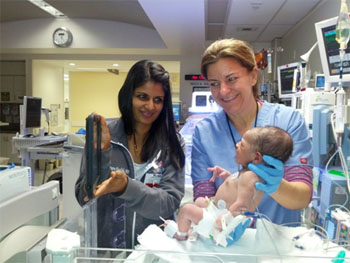 Moms who are not ambulatory after delivery, perhaps because of a cesarean section or other complications, are able to see their newborns in the Neonatal Intensive Care Unit due to the new iPad initiative. The program, called BabyTime, allows moms to visit with their infants and the medical team over a secured Internet connection.

"BabyTime will help bridge communication with the family and the baby's medical team and is an excellent use of technology to help new mothers bond with their babies, even when they cannot be physically at their babies' bedside," said Charles F. Simmons Jr., MD, chair of the Cedars-Sinai Department of Pediatrics and Ruth and Harry Roman Chair in Neonatology. “When doctors and nurses are treating a newborn in the NICU, mom can be right there asking questions and getting updates, even if she’s on a different floor.”

Simmons estimates that 20 to 30 percent of mothers who undergo C-sections do not feel well enough to travel from their bed in the Labor and Delivery unit to the NICU for the first 24 to 48 hours.

As soon as the baby is admitted to the Neonatal Intensive Care Unit, an iPad is set up next to the infant’s incubator. A second iPad is delivered to the new mother, who can log onto BabyTime twice a day.

“The BabyTime program will reduce fear and stress in the new moms as they are able to see their babies and also communicate with the doctors and nurses,” said Selma Braziel, nurse manager for the Neonatal Intensive Care Unit.

“BabyTime is an excellent marriage of healthcare and technology, allowing us to securely use new technology to keep our patients more informed and more comfortable during their stay,” said Darren Dworkin, senior vice president and chief information officer at Cedars-Sinai.

Rachel Little was one of the first mothers to employ BabyTime. After her daughter was born in mid-February by C-section, Little was unable to make her way to the Neonatal Intensive Care Unit, where her infant was being treated. Little was eager to see her baby and hear about her condition.

"Even though I couldn't hold her, she stopped crying when she heard me talk to her," Little said.

In turn, Little herself was comforted by being able to hear the physician explain the infant’s condition. "While it’s not the same as being able to hold your baby, it was almost as good," Little said.

Just a day later, Little was able to bond with her baby the old-fashioned way - face to face - when her daughter was released from the NICU.