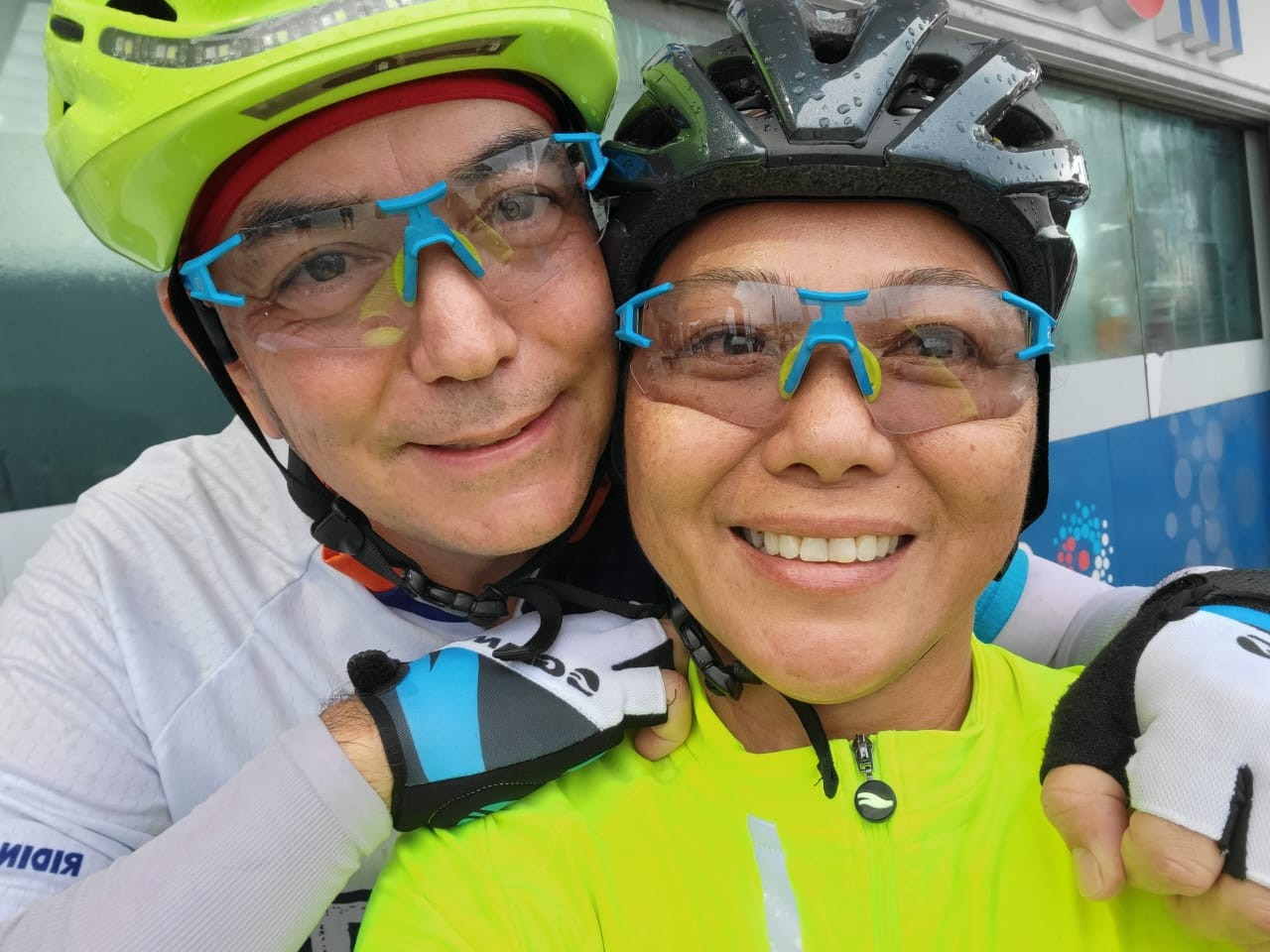 Tom and Therese Mazzei traveled from Guam to Cedars-Sinai so Tom could receive specialized heart care. Photo courtesy of the Mazzei family.

People in love often say two hearts beat as one, and the hearts of Tom and Therese Mazzei are definitely in sync. When 59-year-old Tom Mazzei traveled from Guam to the Smidt Heart Institute at Cedars-Sinai for treatment, Therese Mazzei, his wife of more than 30 years, accompanied him and found herself being examined for her own heart symptoms.

Last fall, Tom Mazzei, director of sales for a car dealership on island, had enjoyed an evening with some cycling friends who gathered for dinner at his home in preparation for their regular Saturday ride the next morning. But he woke up later that evening with chest pains.

He was having a heart attack.

“I went downstairs to get some water, and when I came back up, I knew there was something seriously wrong,” Tom Mazzei said. “I woke Therese.”

After treatment at his local hospital’s intensive care unit, Tom Mazzei’s condition stabilized. He was discharged five days later, knowing he needed a surgical procedure to clear the blockages doctors had found in his arteries. And he knew he would have to leave the island to get the care he needed.

However these patients are referred to Cedars-Sinai, clinical patient coordinators are with them every step of the way, coordinating medical exams, accommodations, travel arrangements and even visits to local attractions.

Bias and her colleagues gather each patient’s medical records and test results from their primary physician and forward them to the Cedars-Sinai physician appropriate for their care. Then they schedule all needed consultations, testing and procedures before the patient even arrives.

Arriving at Cedars-Sinai, Tom Mazzei expected to undergo open-heart surgery. He was elated when doctors in the Smidt Heart Institute told him he could be treated with minimally invasive procedures instead.

To treat a blockage in Tom Mazzei’s left anterior descending artery, which supplies blood to the front left side of the heart, Danny Ramzy, MD, vice chair of Innovation, director of Robotic & Minimally Invasive Cardiac Surgery and associate professor of Surgery, performed a robotic mammary artery bypass, diverting an artery that supplies the chest wall and breast to feed blood to the heart instead.

“The robotic procedure is much less invasive, so patients recover much more quickly,” said Ramzy. “But the procedure isn’t available everywhere. Even in the U.S., very few surgeons perform it on a regular basis.”

The mammary artery bypass is also long-lasting, an advantage for someone who lives more than 6,000 miles away, said interventional cardiologist Raj Makkar, MD, vice president of Cardiovascular Innovation and Intervention and the Stephen R. Corday, MD, Chair in Interventional Cardiology.

After Tom Mazzei spent a few days recovering from the bypass, Makkar treated a blockage of his right coronary artery, which supplies blood to the right side of the heart, by placing a small tube called a stent to keep the artery open. Through a tiny incision, he directed instruments to the heart via an artery in Tom Mazzei’s wrist.

“We restored blood flow to his heart without making a big incision in his chest,” said Makkar. “While most centers would offer him open-heart surgery, we combined our team’s best talents—stenting expertise and robotic mammary expertise—to provide a minimally invasive solution personalized for this particular patient.”

Therese Mazzei accompanied her husband to Cedars-Sinai for his procedures, and it turned out she was in the right place at the right time.

“I came to the hospital at 5:30 a.m. to follow Tom to his procedure,” Therese Mazzei said, “but I started to feel ill. I went to the waiting room and felt like I was going to pass out. I felt really weak.”

Therese Mazzei made her way to the Ruth and Harry Roman Emergency Department, where physicians were concerned she might be having a heart attack. Signs of heart attack in women can differ from those in men, and can include extreme fatigue, nausea and jaw pain.

“The team was really quick in attending to me,” Therese Mazzei said. “They decided to do an angiogram. So I was there having my procedure and my husband was across the hall in the other operating room. Afterward, he went straight to the ICU and I was in the recovery room, but I was able to video chat with him to let him know I was OK and to see that he was OK.”

Therese Mazzei had a left heart catheterization, a minimally invasive test that ruled out any blockage, and no further procedure was necessary. The couple chalked up her symptoms to anxiety over Tom Mazzei’s condition, plus disrupted meals and sleep during their trip from Guam.

With Tom Mazzei ready for discharge, Bias gathered his medical records and also Therese Mazzei’s for their trip home. Husband and wife are doing well, and Tom Mazzei is even back to riding his bike.

“I just finished a 32-mile bike ride,” he said. “It’s my third ride since I’ve been back. My heart attack was pretty bad. I was really afraid, but I’m doing better than I could expect. We were really fortunate to be treated at Cedars-Sinai.”