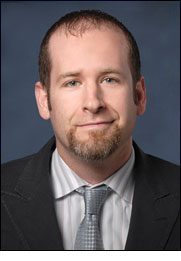 Los Angeles - Feb. 20, 2012 – A Cedars-Sinai research scientist has been awarded two national grants totaling more than $2.5 million, including a prestigious Research Project Grant from the National Institutes of Health to study potential treatments for Alzheimer’s disease.

Terrence Town, PhD, is studying drugs that potentially could disrupt the formation and accumulation of sticky amyloid plaques that build up in the brain and are widely considered a root cause of Alzheimer’s disease, a chronic and fatal condition that impairs memory and cognition. In the disease’s final stages, patients require round-the-clock care.

Amyloid is an abnormal protein usually produced in the bone marrow that can be deposited in any tissue or organ.  An unhealthy buildup of the protein is believed to lead to diseases such as Alzheimer’s.

“Alzheimer’s has the potential to bankrupt this country,’’ said  Town, PhD, the studies’ principal investigator and research scientist in the Cedars-Sinai Regenerative Medicine Institute and the Departments of Biomedical Sciences and Neurosurgery. “It is the public health crisis of our time and the big question is: what are we going to do about it?  Our approach is to target the body’s immune system to clean up amyloid plaques and thereby allow brain regeneration.”

The NIH grant totals more than $2 million over five years and is earmarked for the study of macrophages, common cells that circulate in the blood and are capable of clearing damaging substances, such as plaques.

“Our goal is to identify drugs that give the signal to macrophages to enter the brain and eat away at the amyloid plaque buildup,” said Town, the Ben Winters Chair in Regenerative Medicine. “These macrophages have a central mission in life: to eat noxious substances. But because the brain is somewhat shielded from the immune system, peripheral macrophages are given the message not to go into the brain and eat the amyloid plaques. So, if we could identify what’s blocking this beneficial response in these cells, the hope is that a drug would enable the macrophages to leave the blood, go into the brain and remove the plaques.”

The second grant, for $550,000, was awarded by the American Federation of Aging Research and will enable Town and his team of researchers to study new ways to reduce brain inflammation.

The author of more than 90 scientific publications, Town is a well-known neuroimmunologist whose research focuses on understanding and treating neurologic disorders including Alzheimer’s, viral encephalitis and stroke.

According to the Alzheimer’s Association, more than 5.4 million Americans have the disease, and its incidence is on the rise. Alzheimer’s destroys brain cells, causing memory, thinking and behavioral problems severe enough to affect work, family and social relationships. It eventually affects the basics of daily living, is incurable and, ultimately, is fatal. Alzheimer’s is the sixth-leading cause of death in the United States and the fifth-leading cause for people 65 and older, association statistics show.

The Cedars-Sinai Regenerative Medicine Institute brings together basic scientists with specialist clinicians, physician scientists and translational scientists across multiple medical specialties to translate fundamental stem cell studies to therapeutic regenerative medicine. The Institute is housed in new laboratories designed for stem cell and regenerative medicine research. At the heart of the Institute is a specialized core facility for the production of pluriporent stem cells capable of making all tissues in the human body from adult human skin biopsies. Cells produced within the Institute are for use in a variety of Cedars-Sinai medical research programs, currently focusing on understanding the causes of and finding treatments for diseases of the brain, heart, eye, liver, kidney, pancreas and skeletal structures, as well as cancer and metabolic disorders.