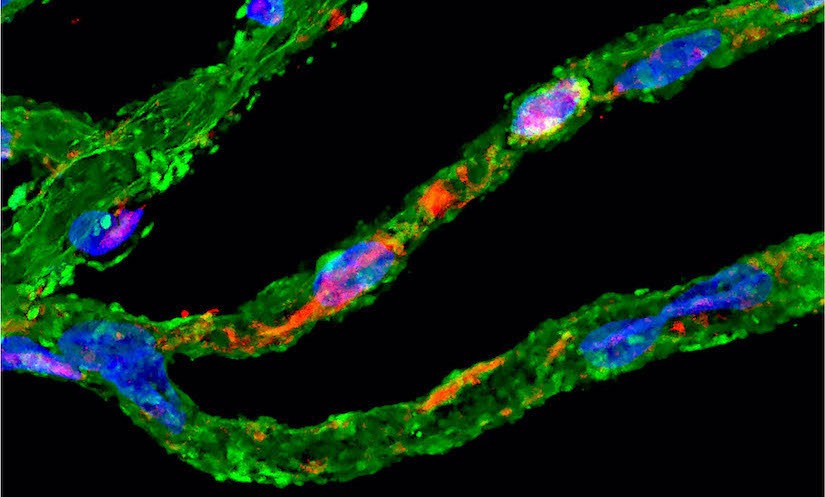 Image shows degenerated vascular cells (pericytes, in green) with accumulation of vascular amyloid-beta (in red) in the retina of an Alzheimer’s disease patient. Image by Cedars-Sinai.
crop -- Newsroom 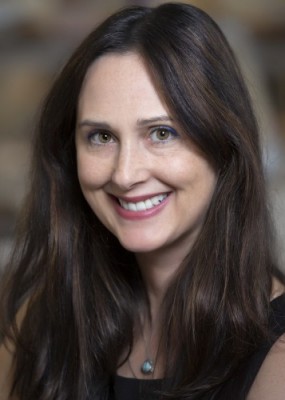 Alzheimer's disease in its early stages affects the integrity of small blood vessels in the retinas of patients, according to a recent study led by Cedars-Sinai. This discovery holds promise for early diagnosis of Alzheimer's through the retina, a back-of-the-eye organ that is an extension of the brain and easily accessible for live, noninvasive imaging.

Alzheimer's disease is the leading cause of dementia and is characterized by a severe decline in memory and mental ability serious enough to affect daily life. It is estimated to affect more than 5.5 million people in the U.S., including about 10% of adults age 65 or older, and the incidence is rising, according to the Alzheimer's Association. Alzheimer's is presently incurable.

“We revealed early molecular and cellular loss in blood vessels together with accumulation of amyloid-beta deposits, a buildup of a toxic protein, in retinal blood vessel walls of Alzheimer's patients.” said the study's senior and corresponding author Maya Koronyo-Hamaoui, PhD, associate professor of Neurosurgery and Biomedical Sciences at Cedars-Sinai. “The buildup of this protein in the brain is a signature of Alzheimer's. We were able to map these vascular abnormalities and find that certain regions of the retina were more vulnerable.”

For the new study, published in the journal Acta Neuropathologica, the investigators examined 62 post-mortem eye tissues of 29 patients who had Alzheimer's, 11 patients who had mild cognitive impairment—an early stage of Alzheimer's that precedes dementia—and 22 individuals with normal cognition.

In the Alzheimer's patients, the study found three abnormalities within tiny blood vessels in their retinas: high death rates for pericytes, a type of cell that lines the vessels; low levels of PDGFRβ, a protein receptor that promotes development and growth of cells; and accumulation of toxic amyloid-beta forms. Among many functions, pericytes help regulate blood flow and maintain the blood-brain barrier that protects the brain from toxins.

The discovery of abnormalities in retinal blood vessels in patients with mild cognitive impairment holds the potential for diagnosing Alzheimer's years before people show symptoms. Such early detection could provide insights into the disease and enable treatments to be created.

"It appears that amyloid-beta deposits in the blood vessels and the lack of PDGFRβ are strongly linked to pericyte degeneration in the Alzheimer’s retinas," Koronyo-Hamaoui explained. In addition, the researchers found the most toxic forms of amyloid-beta building up within the pericytes themselves. These changes mirrored those in the brains of the patients.

"Our study indicates that retinal pericytes underwent early programmed cell death in Alzheimer’s patients," Koronyo-Hamaoui said. Deficiency in vascular PDGFRβ was tightly connected with increased brain levels of amyloid-beta buildup, including on the walls of brain arteries, and loss of cognitive function in those patients.

"We know that vascular flow and function are critical for cognitive function, and this study is the first to provide the molecular and cellular mechanisms," Koronyo-Hamaoui said.

The retinal abnormalities detected in the new study also were found in the patients with mild cognitive impairment. Taken together, these findings offer significant insights into how Alzheimer's develops, with major clinical implications, according to Keith L. Black, MD, professor and chair of the Department of Neurosurgery at Cedars-Sinai.

"The discovery of abnormalities in retinal blood vessels in patients with mild cognitive impairment holds the potential for diagnosing Alzheimer's years before people show symptoms," Black said. "Such early detection could provide insights into the disease and enable treatments to be created."

Black was a co-author of the new study. Haoshen Shi, MD, PhD, a postdoctoral scientist in Koronyo-Hamaoui's laboratory, was the first key author, and Yosef Koronyo, a research associate, was the second key author. Co-authors included researchers from the USC Keck School of Medicine and the Doheny Eye Institute in Los Angeles.

The next step for the researchers is to pursue further development of noninvasive high-resolution retinal imaging, potentially targeting pericytes and the molecular changes they discovered in blood vessels, as a means to diagnose Alzheimer's.