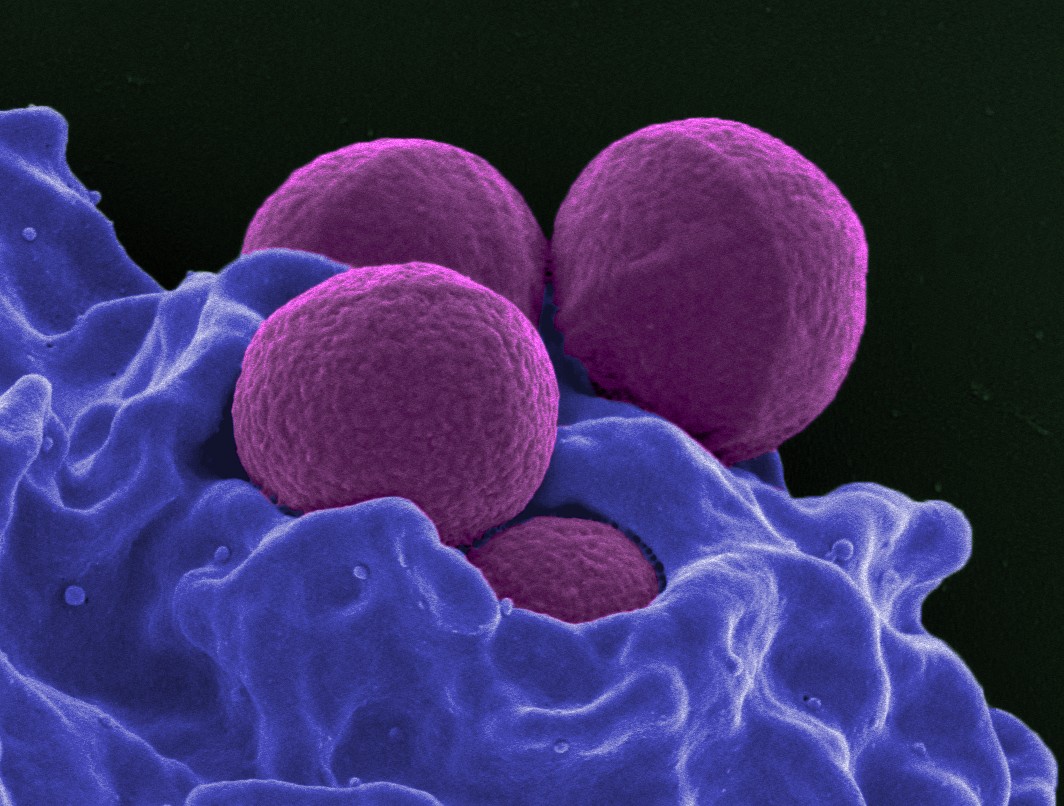 The bacterium that causes Staph infections, Staphylococcus aureus (shown here in purple), is becoming more drug-resistant, according to Cedars-Sinai experts. Image courtesy of the National Institute of Allergy and Infectious Diseases.

In a recent interview with BioWorld Science, David Underhill, PhD, professor and chair of the Department of Biomedical Sciences at Cedars-Sinai, discussed how Cedars-Sinai investigators have been able to evoke in mice an effective immune response against the bacterium that causes staph infections.

The findings, published in the journal PLOS Pathogens, potentially could enable development of a vaccine, which is "desperately" sought by the medical field, Underhill told writer Anette Breindl. Staph infections are increasingly common, and the bacterium that causes it, Staphylococcus aureus, is becoming more drug-resistant, he explained.

For their study, Underhill and his colleagues developed a vaccine that included a shell made from a component of yeast cells, known as beta-glucan, that they loaded with Staphylococcus aureus. They administered this vaccine to mice, which then developed both an antibody and a T-cell (white blood cell) response. The vaccine was effective for up to eight weeks.

Underhill said staph is challenging, in part, because after being infected with the bacterium, the body's immune system does not retain the immune memory that leads to lasting protection.

How staph manages to evade long-term immunity is not completely understood, he told Breindl. "Staph seems to trick the immune system into not caring," he said. "I think it actively induces a suppressive immune response to its antigens." But exactly how it does so is unknown.

For their next step, Underhill and his team plan to investigate the molecular details of the immune response in more detail, in particular to understand why the vaccine evokes a strong T-cell response.

Click here to read the complete story from BioWorld Science.