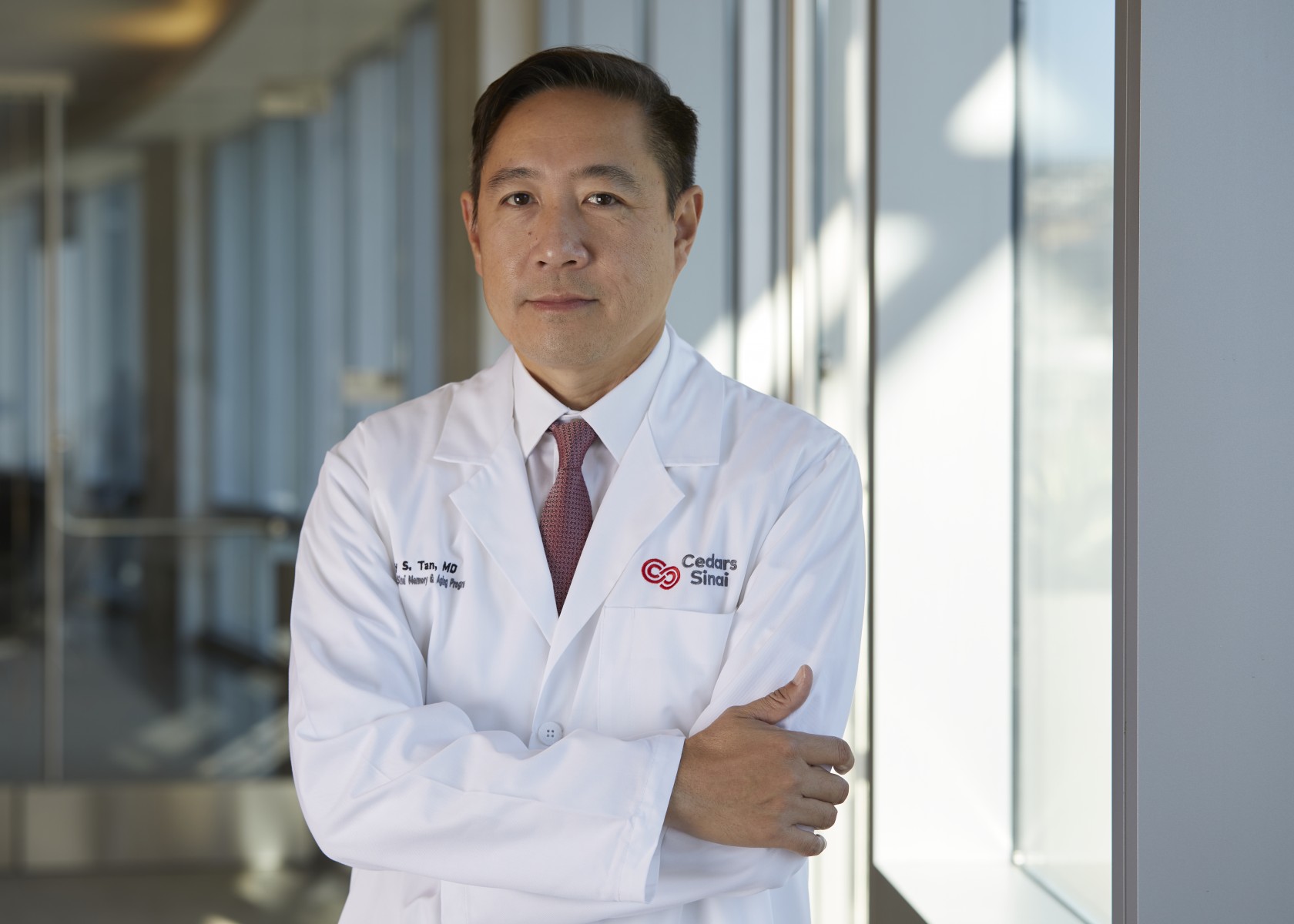 "While there is potential for this drug to slow down cognitive and functional decline, there are also known side effects such as brain bleeding and swelling," said Zaldy Tan, MD. Photo by Cedars-Sinai.
Zaldy Tan MD Doctor lab coat

Days After the Food and Drug Administration Approved Aducanumab for Alzheimer’s Patients, Cedars-Sinai Memory and Aging Experts Discuss What Patients and Caregivers Need to Know About the Controversial Treatment

One week after the Food and Drug Administration (FDA) approved Aducanumab, a first-of-its-kind treatment for Alzheimer’s disease, Cedars-Sinai memory experts weighed in on what patients and caregivers should know about the controversial drug.

Aducanumab, developed by Biogen and marketed under the name of Aduhelm, is a monthly intravenous infusion that is intended to slow cognitive decline in patients in the early stages of the disease.

“Aducanumab has been shown to dissolve clumps of beta-amyloid plaque that builds up in the brain of Alzheimer's patients," said Zaldy Tan, MD, medical director of the Jona Goldrich Center for Alzheimer's and Memory Disorders and director of the Memory and Aging Program at Cedars-Sinai. “However, studies have been inconclusive as to whether eliminating the plaque in the brain preserves cognitive and functional abilities.”

Tan, who was not affiliated with either of the two clinical trials studying Aducanumab, says although the FDA approved the drug, it was a conditional approval. Many experts believe the conditional approval was granted in large part because patients and their families are desperate for new treatments.

“The manufacturer is now required to launch another clinical trial to confirm the safety and efficacy of the treatment,” said Tan, who also serves as the Carmen and Louis Warschaw Chair in Neurology.

However, Tan notes that if the third clinical trial is effective, the benefit to patients will likely be subtle.“While there is potential for this drug to slow down cognitive and functional decline, there are also known side effects such as brain bleeding and swelling,” Tan added. “Despite its recent approval, there is still a lot of uncertainty with this treatment, particularly for patients without evidence of amyloid in the brain or those in later stages of the disease.”

A Treatment, Not a Cure

As Sarah Kremen, MD, director of the Neurobehavior Program in the Jona Goldrich Center for Alzheimer’s and Memory Disorders reiterates, it’s important patients and caregivers understand that the treatment is not a cure for Alzheimer’s.

“At this time, the science has only proven is that this drug can remove amyloid plaque from the brain,” said Kremen, who was involved in two of the drug's clinical trials before joining Cedars-Sinai earlier this year. “Only as clinical research progresses will we better understand how the drug affects cognitive function and if it slows or stops disease progression.”

Kremen and team at Cedars-Sinai are waiting until more information becomes available from the FDA and insurance carriers before deciding whether to offer the treatment, for which the manufacturer expects to charge more than $50,000 a year.

“We understand patients and their families are eager to learn more about this medication,” said Kremen. “We, too, are eager for more information from the FDA, Medicare and insurance companies in order to understand how—and if at all—the treatment will be covered or reimbursable.”

Through this research, scientists have identified certain regions in the retina – the lining found in the back of the eye – that are more affected by Alzheimer’s than other areas.

The findings, coupled with a subsequent, highly sensitive retina imaging technique that can identify and track the development of amyloid plaque, may help physicians predict changes in the brain as well as cognitive deterioration, even for patients experiencing the earliest signs of mild impairment.

“Although there is much to learn about the benefits of Aducanumab, it’s an important step in better understanding disease-modifying agents against Alzheimer’s,” said Maya Koronyo-Hamaoui, PhD, associate professor of Neurosurgery and Biomedical Sciences and one of the lead researchers investigating this retina-related research. “Everyone working in Alzheimer’s research hopes to prevent, or repair, cognitive function. With each tidbit of data and information, we move one step closer toward that goal.”

Alzheimer’s is the most common form of dementia, a group of brain disorders characterized by a general loss of mental abilities, including memory, judgment, language and abstract thinking.

Although doctors are still working to unlock the mystery of what causes the disease, it is likely to involve age and family history, certain genes, abnormal protein deposits in the brain, environmental and lifestyle factors or immune system problems.

It’s estimated more than 5.5 million Americans suffer from the disease.

“Together with our Cedars-Sinai neurologists, researchers, geriatricians, nurse practitioners, neuropsychologists, social workers, genetic counselors and pharmacists, our team will continue to offer the most advanced diagnostic services and treatments for Alzheimer’s disease and other memory disorders,” said Tan. “Our patients and their families are our motivation as we strive to offer the best care possible.”

Read more from the Cedars-Sinai blog: Alzheimer's and Dementia FAQs

The 2022 Annual Report from the Departments of Neurology and Neurosurgery at Cedars-Sinai is available now, detailing recent achievements from this world-class team offering care for more than 150 complex neurological disorders.Among the …
Share this release (opens in dialog)

After two and a half years of living through the COVID-19 pandemic, the upcoming long weekend can feel like a respite from the constant stress, says Itai Danovitch, MD, MBA, chair of Cedars-Sinai’s Department of Psychiatry and Behavioral …
Share this release (opens in dialog)

Experts from the Cedars-Sinai Comprehensive Stroke Center are urging stroke patients not to stop taking daily low-dose aspirin without consulting their doctors. Confusion over a recent U.S. Preventive Services Task Force recommendation has caused …
Share this release (opens in dialog)