Los Angeles - May 1, 2012 – Artist Len Steckler has photographed and painted the celebrated and glamorous, the brightest stars on the planet. In one well-known series of photos, he captured images of his friend, the poet and author Carl Sandburg, with Marilyn Monroe – eight months before her death. 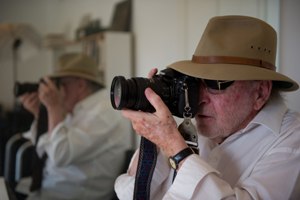 “Tragically, for an artist and photographer, he suffered two different strokes in his visual cortex, the first on one side and the second on the other, ending up with both sides of the visual cortex damaged by strokes,” says Patrick D. Lyden, MD, chair of the Department of Neurology at Cedars-Sinai Medical Center, where Steckler was hospitalized for a month.

Yet the photographs he shoots today are sharp – he refuses to rely on autofocus – and his subjects are perfectly framed. Steckler's wife, Enid, credits what she calls an artist's sixth sense. But Steckler's convinced it's something more.

He wonders if his years of experience guide the vision he has left and his brain takes over from there to reveal details and subtleties that escape normal observation. This, he believes, is part of the magic of the brain and its circuits, an ability residing within each human – artist or not. Perhaps it's what gave Ludwig van Beethoven the ability to compose music and conduct orchestras, despite his loss of hearing.

“What I'm seeing now I think is elevated in some way. I have a lot of questions about this. … I assume the mystery is the body itself, but I've never seen the way I'm seeing now. In my loss, I gained,” he says.

Lyden agrees that Steckler's brain is compensating but believes that's only part of the picture.

“There is quite a bit of science around the ability of the brain to perform in ways that surprise us, and there's still a lot about the brain we don't understand. An old adage says we only use 5 percent of our brain. That's ridiculous. The truth is that most of the brain is doing things that we don't yet comprehend. So there seems to be a very strange and unpredictable benefit to patients who have had brain injuries if they can tap into or harness those reserves,” explains Lyden, who directs Cedars-Sinai's Stroke Program and is the Carmen and Louis Warschaw Chair in Neurology.

“In Len's case, it's a little bit more complicated,” he continues. “Although he will insist that anybody can do what he does, the fact is that before his strokes and before he lost his eye, he had a phenomenal genius for ‘seeing.' If you see his art, you see that. He can walk past a junkyard or a trash heap that you and I would walk right past, and he snaps a photograph that becomes a masterpiece. When he accesses the same adaptation mechanism that all of us have, it's building on top of the gift of genius that he was born with, and you get a very unusual result.”

Steckler, who lives in Los Angeles, began having headaches near the end of 2010 and eventually was referred by a physician friend to Lyden. Steckler suffered a small stroke in late January; the strokes affecting his vision occurred in early March and on March 22. By then, the Stecklers had become friends with Lyden, who took a lead role in his care.

“I called 911 immediately. The paramedics gave him oxygen here at the house and got him right to Cedars-Sinai. Dr. Lyden and his assistant were waiting for him at the ER,” Enid recalls, adding that Steckler was not considered a high-risk patient, based on most factors: His blood pressure tends to be low, not high, and his arteries appear healthy. Scans and tests have all been negative. Even a cranial biopsy operation performed by neurosurgeon Ray M. Chu, MD, ruled out the possibility that skin cancer cells had survived and spread to Len's brain. That was the first time Chu was involved in Len's care.

The second came after Steckler went home from the hospital, and blood – thinned by drugs to prevent more strokes – escaped the vessels, pooling and pressing on his brain. Enid noticed changes in her husband's behavior and thinking; she emailed her concerns to Lyden, who was traveling internationally on a research study. “He called me – he was in Germany, I think – and said, ‘I'm setting up an MRI first thing in the morning,' ” Enid says. When the scan showed the hematoma covering about 75 percent of Steckler's brain, he immediately was wheeled from the S. Mark Taper Foundation Imaging Center to the ER. Chu met him there and later performed surgery to drain the fluid and save his life.

After the strokes, when Steckler picked up his camera again, things looked different. Today, when he frames a subject, only part of the picture – maybe 50 percent – is clear in his field of vision. But as he shifts his attention through the frame, other objects pop. “As I move the camera or as I move my eye, I say, ‘What is that? That is so wild.' And as I center in, the whole picture becomes more profound. It has more fluidity. It has more texture. It has more color. And this is in the 40 percent or 50 percent that I'm not supposed to be seeing,” he says.

Although his professional work includes museum quality paintings, fashion photography for national magazines, photo shoots around the globe and images of the most sought-after stars and celebrities, it's ordinary folks who captivate Steckler's attention now. His greatest satisfaction comes from slipping into “the Nickel,” downtown LA's Skid row area,  to document the plight of those he calls “the marginal people.” This is not the first time his heart and his art have been touched by the despair that most people try not to notice.

“I painted it as a child. I painted it in Europe and I photographed it. That is the essence of humanity, when you don't have anything and you're living your life on a sidewalk or a street. … It seems like such a tremendous, tremendous, utter waste,” he says, adding that he shoots the images as he sees them, with the environment's textures, colors and shapes filling the frame. Nothing is more important than portraying and seeking truth, he believes, especially in a time when society is increasingly infatuated with artificiality and tricked by photographic and computer-generated manipulation.

“We all are capable of seeing more than we think we see. If we could learn to really ‘see' in actuality what we're being shown – to really see and understand it – I think this would be a better place to live,” Steckler says.