AARP: Rising Air Pollution May Be Hurting Your Health 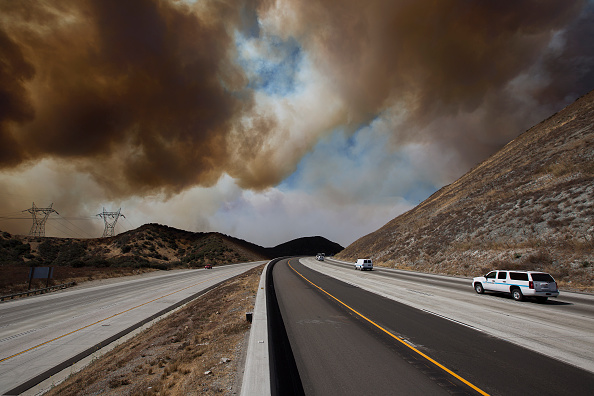 Smoke from a California wildfire drifts over a freeway. Photo by Getty.

AARP recently interviewed Zab Mosenifar, MD, professor and executive vice chair of the Department of Medicine at Cedars-Sinai, about a new study suggesting air pollution may be shaving weeks to years off life expectancy and could be the possible cause of some serious lung conditions.

According to a new analysis of Environmental Protection Agency (EPA) data, after almost a decade of consistent improvement, air quality declined by 5.5% on average nationwide from 2016 to 2018.

According to the AARP article, the new findings say there’s a rise in microscopic particulate matter, known as PM2.5, from car and truck emissions, industrial and residential soot, smoke from wildfires, volatile compounds from factories, diesel generators and the burning of natural gases.

“When microscopic particles from pollution are inhaled, they penetrate the deepest part of the lungs, which can create a cascade of reactions and inflammation,” said Mosenifar, who was not involved in the study. “The reactions then take on a life of their own.”

As AARP details, the study suggests that an increase in air pollution was associated with 9,700 additional premature deaths of adults over age 30 from 2016 to 2018 and about 18,000 years of life lost among the elderly nationally. They attributed about 1,400 of the deaths in California to pollution stemming from the wildfires there in November 2018.

“A healthy person may have a minor reaction, or the inhaled particles can create progressive scarring, or fibrosis, of lung tissue, causing shortness of breath, fatigue and a chronic cough in vulnerable adults with emphysema or other respiratory illnesses,” said Mosenifar.

There are, however, some tips experts recommend to protect yourself.

“Don't exercise near or in heavily trafficked areas. When you work out, you inhale up to six times as much particulate matter as when you're at rest,” said Mosenifar.

Mosenifar and other experts suggest that wearing a surgical mask can help prevent breathing in particulate matter and that air filters used at home can also help you breathe a bit easier.

Click here to read the complete article from the AARP.

Read more on the Cedars-Sinai Blog: How Does Wildfire Smoke Affect Your Health?

Cardiothoracic surgeons in the Smidt Heart Institute at Cedars-Sinai recently performed a groundbreaking robotic-assisted lung transplant. With a new right lung, the patient, a 69-year-old man from Claremont, California, is back to exercising and …
Read more

AARP: Rising Air Pollution May Be Hurting Your Health